On March 11, Angus-Reid released a new poll of Alberta provincial politics. It confirmed what they had discovered back in November. 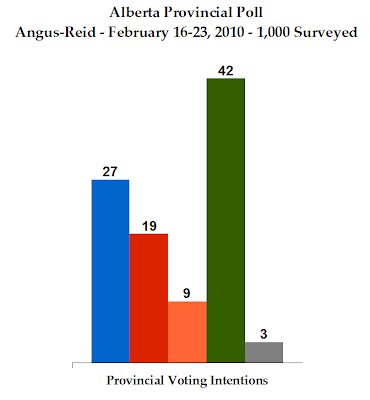 The Wildrose Alliance has maintained its lead, and even enlarged it. They are up three points from that November poll and stand at 42%. The Progressive Conservatives are showing the smallest bit of life with a gain of two points to 27%.

The provincial Liberals have lost a bit of their shine, dropping six points to 19%. The NDP has remained steady at 9%.

The Wildrose Alliance leads in all demographics: gender, age, and income levels. The Progressive Conservatives are strongest, but still behind, among older and middle class voters.

In Edmonton, the WRA leads with 35%. The Liberals follow with 27% and the Progressive Conservatives are third with 25%.

Coupled with the recent poll by Angus-Reid on Premier approval ratings, this is bad news for Premier Ed Stelmach. He is unpopular and his party is on the rails. The only question is whether the Wildrose Alliance can continue this momentum through to the election campaign, and convince Albertans that they can actually govern the province.

But, as the ADQ has shown us in Quebec, leading in the polls between elections does not mean future government for new parties. The ADQ grew too big too fast, and collapsed upon itself following the 2007 and 2008 provincial elections. The Wildrose Alliance is in danger of the same thing.
Posted by Éric at 9:08:00 AM