I finally have some time to work on a new projection, and the result is completely underwhelming. At the national level, we have no seat changes, a 0.1 point drop for the Conservatives, and a 0.1 point gain for the Greens. 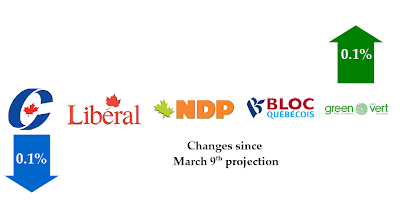 There is some more interesting movement at the regional level, however.

Let's start with British Columbia. The big winners here are the Greens, who gain 0.7 points and are now at 12%. The Conservatives only drop 0.1 points to 35.7%, but the Liberals and New Democrats each drop 0.4, down to 24.9% and 25.4%, respectively. The Greens are still very far from putting Ms. May in an position to win, but the Conservatives are doing well to have stopped their decline.

In Quebec, the Greens make the biggest jump with a gain of 0.3 points to 7.5%. The Liberals are down 0.2 points to 24.8% while the Conservatives are down 0.1 points to 17.4%. Both the NDP and Bloc Québécois are steady with 11.3% and 37.9%, respectively. The Bloc continues to remain strong, while the two main federalist alternatives are unable to make gains.

Finally, in the North there is no movement.

This is a relatively ho-hum update for all of the parties, but the winner of the last 17 days has to be the Greens. For some reason, they have made gains in five of the six regions, and two of them (in BC and the Prairies) were significant.

The big loser has to be the Conservative Party. They dropped in every part of the country. The silver lining, however, is that the big drops came in regions they already dominate (Alberta and the Prairies). Everywhere else the decline was tiny.
Posted by Éric at 11:51:00 AM