On March 9, Corporate Research Associates released their results of a poll on the provincial voting intentions of New Brunswickers. 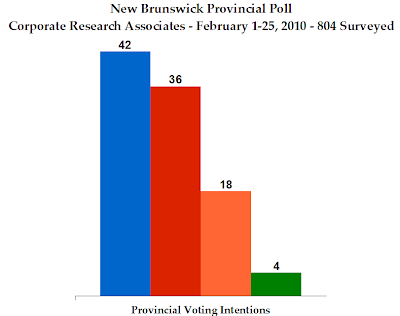 The Progressive Conservatives have maintained their lead with 42%, but that is a drop of four points compared to CRA's November 2009 poll. However, with an MOE of 3.5, this might not be significant.

The Liberals have remained steady at 36%, the Hydro-Québec deal keeping them from a position of re-election.

The NDP has gained four points and is at 18%, a decent result for the party in New Brunswick.

The Greens remain steady at 4%.

Compared to CRA's February 2009 poll, we see that the Progressive Conservatives (+8 points) and the NDP (+5) have been the big winners over the last year. The Liberals have dropped a massive 14 points in that time span.

Only 34% of New Brunswickers are satisfied with the direction of the government, down 8 points from November.

Though his party is doing well, David Alward is the choice as best premier for only 27% of those polled, down two points. Shawn Graham, the current Liberal premier, is not far behind with 25%, down four. Roger Duguay, leader of the NDP, is up three points to 11%.

The results of the 2008 federal election are, interestingly, within the ballpark of current support levels. The Conservatives took 39% of the vote in New Brunswick in that election, only three points lower than the current PC support level. The Liberals took 32%, only four points lower. The federal NDP, however, does better with 22% compared to this poll's 18%. And the Greens, who took 6% federally in 2008, are about at the same level as the provincial Greens.

In other words, provincial politics in New Brunswick could be an indicator for the next federal election.

(Note, CRA has done polls for all Atlantic provinces. I will tackle each one at a time over the next few days. Also note that I've added a list of provincial links to the right. These links group all the posts about each province's politics, so that if you want to see all of my posts about New Brunswick politics, you can click on the New Brunswick link and all of them will be shown together.)
Posted by Éric at 10:45:00 AM