EKOS has its weekly poll out, and we're starting to see some movement. 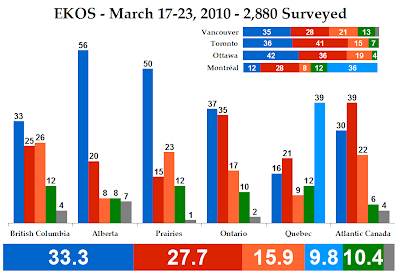 In Quebec, the Bloc is up a little to 39.2%, but the Liberals are down around three points to 20.9%. The Conservatives are at 16%, still not good enough, while the NDP has dropped three to 9.3%. The Bloc maintains its lead in Montreal with 36%, followed by the Liberals at 27.9%. The NDP has dropped about five points here to 8.3%, perhaps endangering Thomas Mulcair's seat.

Things are relatively stable in British Columbia, the Tories still leading with 33.4% and 35.2% in Vancouver (up about five points). The NDP (25.6%) and the Liberals (25.3%) are still fighting for second, but are within striking distance of the Conservatives. The NDP is not doing well in Vancouver, however, as they are down about seven points to 21.4%. The Greens, at 12.1%, have dropped about four points since last week in the province.

In Alberta, things look odd because of a 7.3% result for "Other". The Liberals, though, gain three points and are at a very strong 20.3%. 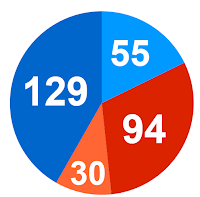 Thanks to weak Liberal, NDP, and Conservative results, the Bloc manages to win 55 seats in Quebec.

This poll shows something we haven't seen much of lately: the combined Liberal-NDP seat totals being below that of the Conservatives. This isn't a necessarily good poll for the Tories as they are relatively stable, but it is a bad poll for the Liberals. They are beginning to fall away, their lead in Ontario seemingly most vulnerable.
Posted by Éric at 9:29:00 AM