Earlier this month, Corporate Research Associates released their quarterly polls for Atlantic Canada. As we wait for the federal campaign to start in earnest, and for the polls to start rolling in, now is a good time to check-in on the provincial situations on the East Coast.

We'll start with Newfoundland & Labrador, which will be heading into an election in the fall. 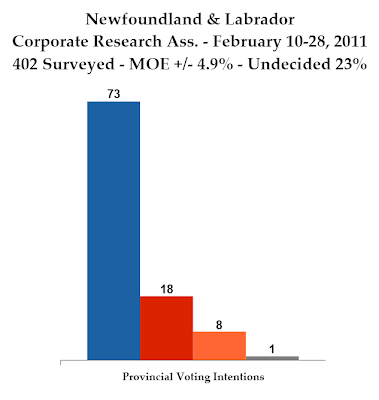 Compared to Corporate Research Associates' last poll (and you can find all of the Atlantic Canadian polls at that link), the Progressive Conservatives have dropped only two points and still lead with 73%. That's merely a statistical wobble.

The Liberals are up two points to 18%, while the New Democrats are steady at 8%. The Greens, who are not a recognized party in Newfoundland & Labrador, are still being poll by CRA and had 1%. These numbers generally line-up with the recent Telelink poll, also conducted in February. 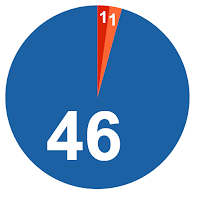 I don't project any changes from my last projection for Newfoundland & Labrador: 46 seats for the Progressive Conservatives, and one apiece for the Liberals and New Democrats.

If there is some small glimmer of hope for the opposition, it is that the popularity of Kathy Dunderdale has fallen by eight points to "only" 64%. Yvonne Jones of the Liberals is up eight points to 18%, while 5% (-3) of Newfoundlanders and Labradorians think Lorraine Michaels of the NDP would be the best Premier. Another 12% aren't sure, but do note that all three party leaders are women.

It looks pretty clear that the Progressive Conservatives will have no problem being re-elected by year's end.

Next up is the other island province, Prince Edward Island. They, too, will be headed to the polls in the fall. Note that this poll has a huge number of undecided: 45%. 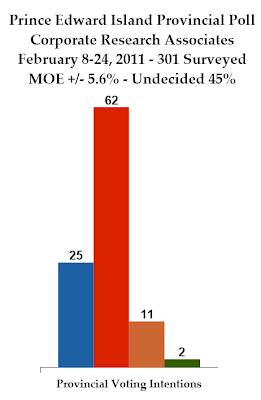 The Island New Democrats are up seven points to 11%, while the Greens are down six to 2%. 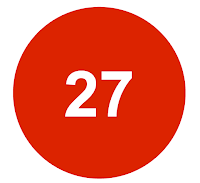 Wiping out the Progressive Conservatives, I project the Liberals would sweep all 27 seats with this poll. People on islands tend to make decisions en masse, I guess. There's no room for error!

Robert Ghiz is the best man to be Premier for 46% of Prince Edward Islanders, ahead of Olive Crane of the PCs, who is down 10 points to only 19%. James Rodd of the NDP is up one point to 3%, while Sharon Labchuk of the Greens is down four to 2%. Another 9% said "none of the above".

Next we move to New Brunswick, which elected the Progressive Conservatives to a majority government back in September. Though the party's shine is starting to wear off, they are still in control of the situation. 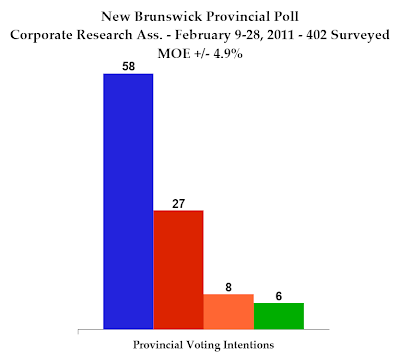 The Progressive Conservatives have dropped three points in New Brunswick to 58%, but still hold a massive lead over the Liberals. They are at 27%, up two points.

The New Democrats, who have a new leader in Dominic Cardy, dropped two points to 8%. The Greens are up to to 6%. 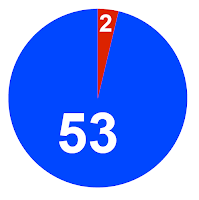 Unchanged from my last projection for New Brunswick, the Progressive Conservatives would sweep all but two seats in the province if another election was held. But note that the undecided in this poll stands at 37%.

Current premier David Alward is the best man for the job for 42% of New Brunswickers, down three points. The phantom next leader of the Liberal Party stands at 16%, while the NDP and Greens are both unchanged at 6% and 5%, respectively. Cardy was not leader when this poll was taken, having been named leader on March 2.

Finally, on to the province with the only interesting political race: Nova Scotia. When we last heard from CRA, NDP Premier Darrell Dexter had enough support to give him a minority government. 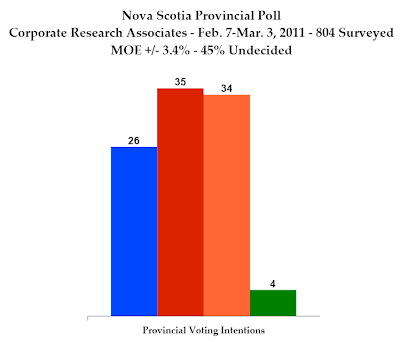 That appears to be no longer the case, as the New Democrats have fallen four points to 34% in the province. The Liberals, with a four point gain, are now in the lead with 35%, while the Progressive Conservatives are steady at 26%.

The Greens take 4% of the vote, unchanged, with 45% being undecided (another huge result). 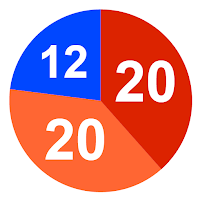 That's a close race, and it is even closer when the seats are tallied. Down five from last time, I project the New Democrats win 20 seats with these numbers, the same amount as the Liberals, who are up four. The PCs, the kingmakers, win 12 seats. What would happen in such a situation is beyond me, but if the Liberals win the popular vote I imagine the NDP might allow them to try to form a government. Do I smell a coalition?

The outcomes of the two elections on the Atlantic coast this fall are virtually assured, the only question being how badly the opposition performs. New Brunswick has a new government, and its voters won't be heading back to the polls until 2014, while Nova Scotia is still two or three years away from a provincial election. That is plenty of time for Dexter to turn things around and Alward to mess it up, but in Newfoundland & Labrador and Prince Edward Island, the opposition has little time left.
Posted by Éric at 1:48:00 PM