Is Simcoe-Grey a Tory riding or a Guergis riding?

In the next election, as federal parties spend millions of dollars jockeying for position on the national stage, two MPs will be waging their own local campaigns all by themselves. So what are the odds independent MPs André Arthur and Helena Guergis will be returning to the House of Commons after the ballots are counted?

The rest of the article can be read on The Globe and Mail website. Thanks goes to The Globe's Rhéal Seguin and Josh Wingrove and the Alliston Herald's Craig Widdifield for providing some local background knowledge of Portneuf - Jacques-Cartier, Edmonton - Sherwood Park, and Simcoe - Grey.

In the process of researching this article, I was able to delve a little deeper into the question of independents for the projection model. Unfortunately, recent history does not provide a lot of examples of how independents perform from one election to the next.

However, by looking at the fate of independents over the last 30 years I was able to come to some conclusions on how to treat the vote of returning prominent independents (i.e. André Arthur and James Ford) and independents who were last elected as candidates for a national party (i.e. Helena Guergis).

The chart below provides a few examples of how some independents have seen their vote shift after leaving their party. 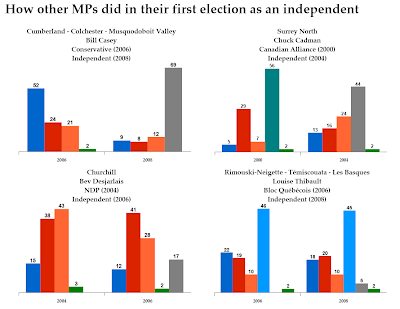 It is important to note why these four MPs left their parties. Bill Casey did so on principle, as he had felt the Conservative budget did not abide by the Atlantic Accord. Standing up for his region, his constituents sent him back to Ottawa with a larger majority of the vote.

Chuck Cadman lost the nomination for the Conservatives in his riding, and was a sick man. But he was well-liked locally, and kept most of his vote.

Bev Desjarlais and Louise Thibault, on the other hand, disagreed with their parties on personal principle (same-sex marriage). Thibault left the Bloc Québécois while Desjarlais lost the nomination to current MP Niki Ashton. Both saw their vote plummet, and the NDP lost Desjarlais's seat because of the vote split.
Posted by Éric at 8:18:00 AM