The latest projection puts the four federal parties at the same level of seats nationally as they were Friday, but regionally seats have swapped hands throughout the country. In the end, the Conservatives are now in a better position than they were on Friday morning.

The Conservatives have gained 0.2 points nationally and now lead with 38.4%. The Liberals, meanwhile, have dropped 0.4 points to 27%, widening the gap between the two parties to 11.4 points. That is exactly where the gap stood on election night in October 2008.

The parties are unchanged at 152 seats for the Conservatives, 72 for the Liberals, 51 for the Bloc Québécois, and 33 for the New Democrats.

Aside from holding steady in Alberta and dropping a tiny bit in British Columbia, the Conservatives have made gains in every party of the country. Most significant is the gain in Atlantic Canada: 1.5 points to 38.9%. But the 0.4 and 0.5 point gains in Ontario and Quebec probably mean more, with the Tories now within 0.2 points of the Liberals in Quebec.

The Liberals lost 0.6 points each in the two westernmost provinces, and were down more than a point in Quebec. The New Democrats, on the other hand, are up big in BC and Quebec.

A lot of seats have changed hands. In Manitoba, Elmwood - Transcona has gone from the NDP to the Conservatives, who are now projected to win 23 seats in the two Prairie provinces. In Atlantic Canada, Moncton - Riverview - Dieppe has gone from the Liberals to the Conservatives, while the Tories have also picked up Montmagny - L'Islet - Kamouraska - Rivière-du-Loup from the Bloc Québécois. Gilles Duceppe has made up for that loss by taking Papineau from the Liberals.

In Ontario, the Conservatives have gained Kingston and the Islands from the Liberals, but have lost Sault Ste. Marie to the NDP and Brampton West, Brampton - Springdale, and Ajax - Pickering back to the Liberals. This results in 54 seats going Conservative in the province, compared to 36 going Liberal and 16 going NDP.

But those Toronto suburban seats are very likely to switch back over to the Conservatives, so the Tory gain in Kingston, Moncton, and Winnipeg become very important. However, no poll has yet been released that was taken since the campaign started, so expect things to change. 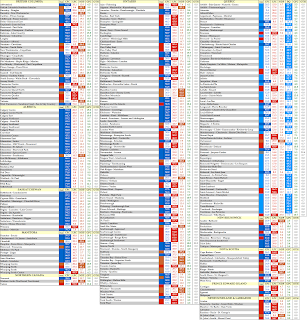