With the Quebec budget coming down today, all political eyes in the province will be turned to the capital. But the budget is not expected to be anything grandiose, and should not serve to do anything to help Jean Charest and his governing Liberals turn the tide. And that is why they need to do. 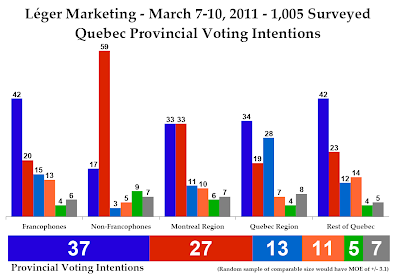 In Léger Marketing's latest poll, the Parti Québécois has gained three points since the last full Léger poll conducted in early February. They now lead with 37%.

The Liberals, meanwhile, have dropped a point to 27%.

The ADQ is down two to 13%, while Québec Solidaire is up two to 11%. It is hard to imagine that sort of number will hold for the small party in an actual election campaign.

The Greens are down two to 5%, while the Others remains maddeningly high at 7%. I imagine much of this is due to François Legault's new movement. If we distributed the Others to the PQ and PLQ a little more realistically, we'd have them at 39% and 28%.

Things are relatively stable among francophones, as the PQ has picked up two points to lead with 42%. The Liberals are unchanged at only 20%, while the ADQ is down two to 15%.

Among non-francophones, the Liberals have dropped five points but still dominate at 59%. The PQ has gained 10 points and is now second with 17%. The Greens are down six to 9%.

The PQ and Liberals are tied in the Montreal region, with 33% support each. That is a drop of three for the PQ and a gain of two for the Liberals. The ADQ is also up, gaining three points to reach 11%.

In Quebec City, the PQ seems to be moving up along with the Bloc, as they have gained six points and lead in the region with 34%. The ADQ is down eight points to 28%, while the Liberals are down three to 19%. 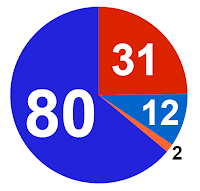 With this poll, ThreeHundredEight projects the Parti Québécois win 80 seats, and form a majority government.

The Liberals would win 31, the ADQ 12, and Québec Solidaire two.

Marois and Charest's numbers are very close to their parties' support levels, as are Deltell's. As I've said before, Khadir is more popular than his party, and his party is already at an incredible high. But is QS's level of support for real?

It certainly could be, but an election campaign is a different beast. There is no way that Québec Solidaire will be able to mount a national campaign similar to that of the PQ and Liberals. They will even be well behind the ADQ in their ability to gain traction in the national media.

It will be something to watch for when the next election campaign actually begins. But we are more than a year away from that.
Posted by Éric at 3:24:00 PM