I have a few provincial polls to get to this week, and I expect there will be a new EKOS poll on Thursday, so the timing is right for a look at February 2011's best and worst case scenarios for each party. Who knows, this may be the last such look before the next campaign.

If you missed it, I also posted earlier today with February's polling averages.

As always, we shall start with the New Democrats.

Their best case scenario was quite good. With 22.7% of the vote, the NDP wins 44 seats but remains the fourth party in the House. They win 14 seats in British Columbia, none in Alberta, four in the Prairies, 18 in Ontario, two in Quebec, and five in Atlantic Canada (I'm awarding each party one seat each in the North for all of these scenarios). 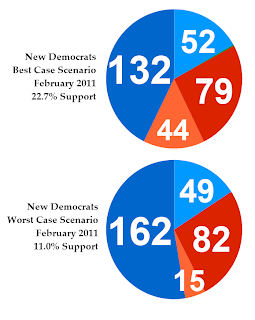 The Conservatives form another minority government, while the Liberals pick up a couple seats.

Their worst case scenario, on the other hand, is quite bad. With only 11% of the vote, the NDP wins 15 seats: two in British Columbia, none in Alberta, two in the Prairies, eight in Ontario, none in Quebec, and two in Atlantic Canada.

This is a wider range than the NDP had in January, which shouldn't be too much of a surprise considering there were twice as many polls in February. Whereas January's range was between 18-36 seats and 13.1%-19.6% of the vote, February's is 15-44 seats and 11%-22.7% of the vote. So, the election could either be a disaster or one for the ages.

For the Liberals, there's a greater risk of it being a disaster.

Their best case scenario still puts them in the opposition benches, as with 33.0% of the vote they win 113 seats: 12 in British Columbia, two in Alberta, six in the Prairies, 54 in Ontario, 18 in Quebec, and 20 in Atlantic Canada. 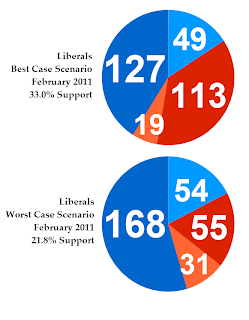 But the Conservatives win 127 seats, and in order to form a government the Liberals would require some sort of agreement with the NDP and Bloc.

Their worst case scenario is catastrophic. With only 21.8% of the vote, the Liberals win 55 seats: three in British Columbia, none in Alberta, one in the Prairies, 29 in Ontario, 11 in Quebec, and 10 in Atlantic Canada.

The Conservatives form a majority government with 168 seats, while the Bloc wins enough seats that they would likely form the Official Opposition after a slew of Liberal MPs resign.

The Conservatives are back up into majority territory, though they are still at risk of losing their hold on government. With 43.1% of the vote, the Conservatives win 170 seats: 25 in British Columbia, 28 in Alberta, 23 in the Prairies, 62 in Ontario, 11 in Quebec, and 20 in Atlantic Canada. 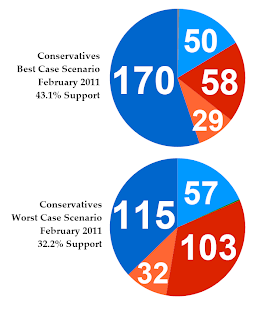 The Liberals are reduced to 58 seats, though the Bloc picks up a few and wins 50.

On the other hand, with 32.2% of the vote the Conservatives win only 115 seats in their worst case scenario: 12 in British Columbia, 26 in Alberta, 20 in the Prairies, 42 in Ontario, five in Quebec, and nine in Atlantic Canada.

The Liberals win 103 seats, and could easily team-up with the NDP, who win another 32 seats. It isn't a majority, but it is far more workable than what the Conservatives would have.

It's a bit of a gamble. The Conservatives have the ability to win a majority if they can run a flawless campaign, at least according to the polling data from February. But they could also tank, stumble, and likely face defeat at the hands of a buoyed opposition.

February was a bit of an exceptional month. It will be very interesting to see how March's numbers go, as things haven't been going smoothly for the Tories of late. I would not be surprised if all of the hubbub around Bev Oda and Jason Kenney and election spending result in no change in the numbers whatsoever. I expect, however, that the Conservatives are likely to drop back to around 35% support.

But how long until we're in another election campaign? The budget could be defeated in less than three weeks. Other scenarios put the government falling before that. It will be a rocky month.
Posted by Éric at 5:07:00 PM