NDP on the rise in new projection

The campaign continues, and yesterday we were treated to three new polls. Two of them, those by Abacus Data and Forum Research, were added in full to the projection model. Harris-Decima, however, has not yet put the full details of their poll on their site, so for the time being I am using the media reports on Harris-Decima's findings at the national level, in Ontario, and in Quebec. I will likely add the other regional data for tomorrow's projection. Note, too, that all of these polls were conducted in part or completely following the dissolution of the House.

Yesterday seemed to be a relatively quiet day on the campaign trail, the Conservatives making a promise that will not be implemented until 2015-2016. While their plan to allow families with children to do income splitting is apparently significant in terms of cost, it really isn't significant until it is implemented. As the promise depends on the paying off of the deficit, it is really more of a pledge than a promise. Unless the Conservatives win a majority, in all likelihood they are not going to get the opportunity to go through with their plan before the next election.

Meanwhile, Michael Ignatieff was in Toronto to talk about Conservative "waste", while Jack Layton was in Saskatchewan. Considering that his party has now dropped to less than 20% in my projection in the Prairie provinces, it is a region of the country that needs a Layton boost.

This all adds up to a seat gain for the New Democrats (now at 34) and a seat loss for the Conservatives (now at 151). But both go through the Liberals (still at 72).

In British Columbia, where there has been little change in the vote projection, the New Democrats have taken Vancouver - Kingsway back from the Liberals. This is an NDP seat, and Don Davies is now back in front.

In the all important Ontario battleground, both the Conservatives and Liberals have lost a little at the expense of the NDP, while in Quebec the Conservatives have taken second place from the Liberals, who have lost 0.5 points. The NDP is now at 14.7% in the province, one of the highest, if not THE highest, levels of support I have ever had the party at in Quebec.

Full summaries of the Abacus and Forum polls will follow later this morning. In the meantime, the details of the new polls added to the projection can be found at the very bottom of this page (new polls highlighted in yellow). 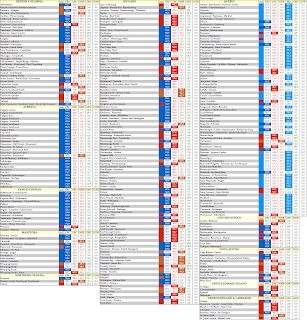