The latest poll from Ipsos-Reid for Postmedia and Global TV is a humdinger. Normally, I wouldn't use such saucy language to discuss a poll, but it would appear to be appropriate in this case. The Conservatives have not only surpassed the magical 40% mark but have flown right by it, standing at 43% and a certain majority.

However, much of this Conservative gain could potentially be the result of a change in questioning method. And that's your anti-climax for the day. 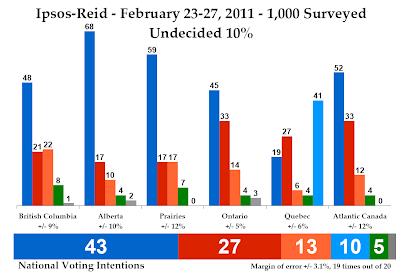 Yes, compared to Ipsos-Reid's last poll conducted between February 8 and 10, the Conservatives have gained four points. The Liberals have also improved, picking up two points to reach 27%. The New Democrats have taken the brunt of the Tory onslaught, and have dropped five points to only 13%.

The Bloc Québécois is up one point to 10%, while the Greens are down five points to 5% in this telephone survey.

Woah, what happened to the Greens? Good question! According to their press release, Ipsos-Reid has now opted not to prompt for the Green Party. Respondents who say they will vote for the Greens are recorded, but no longer is the Green Party listed along with the Conservatives, Liberals, NDP, and Bloc. This is a major change, and is likely responsible for most of this Green slip.

But then where do their five points go? Clearly, they have not gone to the New Democrats. They also do not seem to have gone to the Liberals, who have only picked up two points. Potentially, three of those Green points have gone to the Conservatives, either directly or indirectly.

So what? Well, we don't really know whether prompting for the Green Party is more accurate than not prompting for the Green Party. One pollster I've talked to has told me that in 2008 their firm conducted their polls using both methods, and found the prompted polls to be more accurate. But it could have been a coincidence or luck. Either way, it casts a bit of a shadow on this poll for the Conservative result.

Otherwise, it is a stellar poll for them, though it would appear that only the NDP and Green drops are statistically significant.

In Quebec, the Bloc is up four points to 41%, followed by the Liberals at 27% (a statisically significant gain of 10 points). The Conservatives are down two to 19%, while the New Democrats cruelly fall from 15% to only 6% in the province. 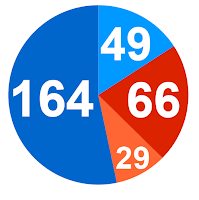 ThreeHundredEight's projection model gives the Conservatives a majority government with the results of this poll. The Conservatives win 25 seats in British Columbia, 28 in Alberta, 23 in the Prairies, 59 in Ontario, eight in Quebec, and 20 in Atlantic Canada for a total of 164. That's a gain of 15 seats over the last projection for Ipsos-Reid.

The Liberals win three seats in British Columbia, none in Alberta, two in the Prairies, 32 in Ontario, 18 in Quebec, and 10 in Atlantic Canada for a total of 66, a drop of 11 seats.

The New Democrats win eight seats in British Columbia, none in Alberta, three in the Prairies, 15 in Ontario, none in Quebec, and two in Atlantic Canada for a total of 29 seats, a loss of one.

Note that the new projection model is completed, and that these projections were done at the riding level. As you can see at the top of the page, I will be updating the projection later today, with full riding details.

This is the sort of poll the Conservatives want to see - or do they? We've often seen the Tories drop after breaching the 155-seat mark. This is clearly a good poll for them. They are strong in every part of the country except Quebec, and even there they put in a respectable performance.

But this is a big number for the Conservatives. We will have to wait and see if other polls put the Tories in majority territory before we can start thinking that they are actually there. With the margin of error this Ipsos-Reid poll is well within the recent numbers we've seen from Abacus and Angus-Reid, but they are at the upper limit.
Posted by Éric at 9:29:00 AM