There has been a flurry of polls over the last two days, with new releases by EKOS, Léger Marketing, Angus-Reid, CROP, and Probe Research. I will cover them all in detail in Monday's poll summary, but for now I'd like to look at the best seat outcomes the Liberals and Conservatives could draw from the results of the three national polls.

Similar to my monthly best and worst case scenarios, this exercise takes the best regional results for each party in each of these three polls, and mashes them together. Doing so results in the Conservatives taking in about 42% of the vote in their best case scenario, while the Liberals take about 29% in theirs.

Clearly, these three polls were not particularly good for the Liberals when they cannot top 30% in a best-case-scenario. I haven't plugged the numbers into the projection model yet, but we can probably expect them to be down on Monday morning.

In any case, when we put the best results of these two parties together, we get the following seat projections: 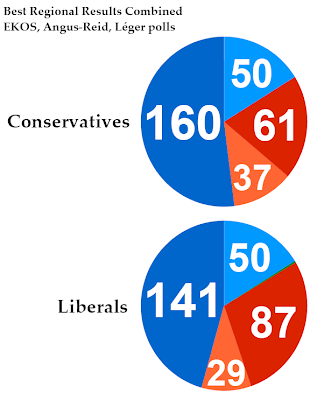 It becomes quickly apparent that none of these three polls, even when we take the best results from each of them, are as good for the Tories as this week's individual Ipsos Reid poll. Nevertheless, the Conservatives still have the potential to win 160 seats, with 70 of them coming in the four western provinces, 61 in Ontario, 11 in Quebec, and 17 in Atlantic Canada.

This actually serves to caution the Conservatives a little. This is a best-case-scenario result, and included a 15-point lead for the party in Ontario and a 16-point lead in Atlantic Canada. And yet they are only five seats over the majority-mark, and both the Bloc and NDP remain strong.

When we look at the Liberals, they do not fare nearly as well. With all of the best regional results of these three polls, the Liberals still only win 87 seats (16 in the West, 37 in Ontario, 14 in Quebec, and 19 in Atlantic Canada). While that is a gain of 10 over their standing at dissolution, it would change very little.

But none of these polls were very good for the Liberals. This scenario has the party with a tiny lead in Atlantic Canada, tied with the NDP in Quebec, and trailing the Conservatives in Ontario. It includes the unlikely mark of 32% in Alberta, better than either their results in British Columbia or the Prairies.

Obviously, the Liberals are gunning for a government in this election. But it will be considered an especially catastrophic failure if the Conservatives win a majority for themselves. At this point, it appears that the Liberals do have it in their power to prevent that from happening, which is as much of a silver lining as the last days of pre-campaign polling will allow.
Posted by Éric at 2:24:00 PM