Ipsos-Reid released a new poll yesterday, conducted for Global Television and Postmedia News and showing relative stability at the national level. But the statistically insignificant Conservative loss puts them just out of a majority government. 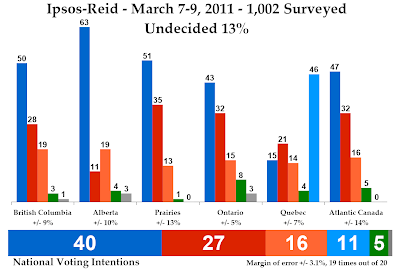 Compared to Ipsos-Reid's last poll conducted between February 23 and 27, the Conservatives have dropped three points but still lead with 40%. The Liberals are steady at 27%, while the New Democrats have picked up three points to stand at 16%.

This telephone survey has a sampling margin of error of +/- 3.1%, 19 times out of 20. None of these shifts are statistically significant.

My own view is that prompting for the Green Party over-represents their support, while not prompting under-represents their support. They are just too hard to measure accurately. For that reason, I am glad that Ipsos-Reid has decided not to prompt the Greens as it balances the ledger a little more. With Nanos and Ipsos on one side, and the other pollsters on the other, hopefully we can achieve greater accuracy in pinpointing Green support.

In this poll, they stand at 5%, unchanged from late February. The Bloc Québécois is up one point to 11% nationally.

Also note the field dates for this poll: March 7 to 9. That makes it a week old, and a lot has happened in the past seven days. We have yet to really see whether or not the recent turmoil on Parliament Hill has had any effect.

A recent poll by the Canadian Association of Retired Persons indicated that older Canadians were leaving the Conservatives and shifting over to the Liberals. That may be the case, considering that the CARP poll was conducted on March 12 and 13, so not at the same time as this Ipsos-Reid poll. But Ipsos shows that, among Canadians aged 55 or older, 49% intend to vote Conservative, while only 24% support the Liberals.

There has been little change in Ontario, where the Conservatives have dropped two points to 43%. The Liberals are down one to 32%, while the NDP is up one to 15%. The Greens gained four points and now have 8% support.

There has been larger changes in Quebec, however. The Bloc Québécois is up five points and now leads with 46%, a real high for them. The Liberals have dropped six points to 21%, while the Conservatives are down four to 15%. I have yet to see enough to call it a real trend, but Tory support in Quebec seems to be on the decline. The NDP is up eight points to 14%, which jives a little bit more with recent polling than Ipsos's last result of 6% for the party.

The Conservatives have slipped five points to 63% in Alberta, with the New Democrats gaining nine points to reach 19%. The Liberals are down six to 11%.

In the Prairies, the Conservatives are down eight points but still lead with 51%. The Liberals make an improbable 18-point gain and now trail with 35%. The NDP is down four to 13%.

Finally, in Atlantic Canada the Conservatives have dropped five points to 47%, ahead of the Liberals who are at 32% (-1). The NDP is up four to 16%. 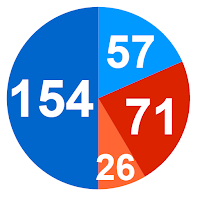 With the results of this poll only, ThreeHundredEight projects the Conservatives win 25 seats in British Columbia, 27 in Alberta, 21 in the Prairies, 58 in Ontario, five in Quebec, and 17 in Atlantic Canada for a total of 154. That is exactly half of the seats in the House of Commons, giving them a pseudo-majority. It is a drop of 10 seats from Ipsos-Reid's last poll, however.

The Liberals win seven seats in British Columbia, none in Alberta, seven in the Prairies, 33 in Ontario, 12 in Quebec, and 11 in Atlantic Canada for a total of 71, a gain of five.

The Bloc Québécois wins 57 seats in Quebec. The federal parties are too low to challenge them in a lot of 2008's closest ridings.

The New Democrats win four seats in British Columbia, one in Alberta, none in the Prairies, 15 in Ontario, one in Quebec, and four in Atlantic Canada for a total of 26. Despite gaining three points nationally, the NDP is down three seats from the last poll from Ipsos-Reid. This is primarily due to their poor polling numbers in British Columbia and the Prairies.

Ipsos-Reid also looked at several issues relating to the upcoming budget, scheduled to be announced on March 22. The results are somewhat contradictory.

First of all, 40% believe that the Opposition should vote for the "Harper budget", whereas 27% believe they should vote against it. Another 17% think they should wait and see what's in it. Unfortunately, Ipsos-Reid didn't crosstab these results by party support, but the numbers of those who feel that the Opposition should support the budget were very close to Conservative support levels in the six regions of the country.

If the budget is defeated, 40% will blame Stephen Harper and his party while 31% will blame Michael Ignatieff and the Liberals. That would seem to indicate that the who and the whys relating to the downfall of the government aren't very important.

As to what should be in the budget, Canadians want the government to spend on things but also reduce spending. Yes, that's right.

On the spending side, 54% believe that the government should make new investments, while 42% think there should be no new major spending.

Fully 92% support more funding for low-income seniors, and really, who would say no to that. Another 84% want to see the Canada Pension Plan expanded, while 91% want there to be more spending on health care.

At the same time, 66% of Canadians support cuts to the budget that would make it balance by 2015. Only 39% support corporate tax cuts, and a bare majority of 51% support more funding for National Defense.

On giving Quebec $2.2 billion for HST equalization, the one thing that could get the Bloc to vote with the government, only 29% of Canadians support the idea (64% of Quebecers support it, understandably).

It's difficult to make sense out of these numbers. Canadians want more government spending, particularly on seniors, health care, and the CPP. They are split on military spending. They don't want the government to give money to Quebec, however, or provide tax cuts to corporations. Nevertheless, they want the budget to be balanced by 2015. How all of these things would be possible is beyond me.

I suspect, though, that virtually all of the government's decisions on the budget have already been made. Clearly they want it to be presented, as they moved the Liberal opposition day to March 25, the latest possible date. It could be that this is an attempt to give the parties (i.e., the NDP) a chance to see the budget and vote for it, or it is just the opportunity for the Conservatives to present a budget they can campaign on. Probably, it is a little of both.
Posted by Éric at 10:57:00 AM