Nanos Research is the first to report on the results of their daily tracking, and so far there has not been much change since the last time the polling firm was in the field.

Nanos will be reporting on a daily basis, with a rolling poll of 400 Canadians per night. This first telephone poll, taken between March 27 and March 29, thus includes 1,200 respondents. In addition to this Nanos poll conducted for CTV and The Globe and Mail, I'm including the (unreported by myself) two-week regional results of the latest Harris-Decima poll conducted for the Canadian Press.

The campaign was slightly more interesting yesterday, with the Liberals unveiling their plan to fund post-secondary education to the tune of $1,000 to $1,500 per year. The NDP talked about capping credit card interest rates at 5% + prime, while the Bloc attacked some of the statements made by Conservative candidate Larry Smith about the protection of the French language.

It is too early, of course, for yesterday's promises to register in any polls. But tomorrow we should begin to find out whether the leaders' pledges and performances are beginning to bear any fruit. In the meantime, we have this Nanos poll tracking the first three days of the campaign. 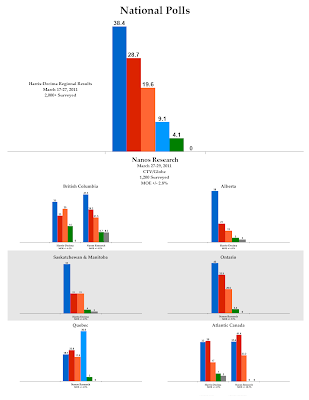 Nationally, there has been very little change in the numbers and certainly none that are statistically significant. What we do have is a 0.5 point loss for the Tories and a 1.1 point gain for the Liberals. The gap is now 9.7 points, whereas it was 11.3 points when Nanos was last in the field in mid-March.

There has not been much statistically significant movement at the regional level either. In Ontario, the Conservatives are down only 0.2 points to 43%, while the Liberals are up two points to 32.9%. The New Democrats are down 2.4 points to 20.6%, a more realistic number for them anyway.

Elsewhere, we see an 8.2 point drop for the NDP in British Columbia, with gains of about four points for both the Tories and Liberals. In Atlantic Canada, the Conservatives are down 6.6 points to 35.4%, while the Liberals and NDP are both up 5.5 points to 41.4% and 23.2%, respectively. 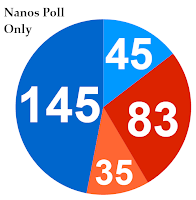 With the results of this poll only, ThreeHundredEight.com projects 145 seats for the Conservatives, 83 for the Liberals, 45 for the Bloc Québécois, and 35 for the New Democrats. Surprisingly good results for the Liberals in Quebec and Atlantic Canada save them.

We are still far away, however, from the Liberals being at over 80 seats in ThreeHundredEight's campaign projection. But if they start getting some slightly more favourable polls this week, things could move in their direction. So far, though, it appears that the Conservatives are stuck.

You will note to the right that I have changed the federal opinion polling trends chart. I am now tracking the day-to-day campaign numbers. You can click on the chart to see a larger version, and to look at the regional tracking. I've also included the older trends chart that records polls taken before the campaign started.

The first three points on the chart are the monthly averages for January, February, and pre-campaign March. For each day of the campaign, the chart tracks the average result of all polls in the field on that particular day. I did something like this during the New Brunswick campaign, and it tends to give a more steady reflection of where the polls are going. It will change as the campaign progresses, and that includes retroactively to incorporate new polls that were in the field for several days. This chart will be updated every day shortly after my daily poll summaries.

Note: Nanos Research asked respondents "For those parties you would consider voting federally, could you please rank your top two current local preferences?" The wording of the Harris-Decima question was not included in their release.
Posted by Éric at 1:59:00 PM