Progressive Conservatives still on track for majority in Ontario

The latest Ontario provincial poll from Nanos Research shows that, though there has been little real change in support, the numbers are moving in Progressive Conservative leader Tim Hudak's favour. 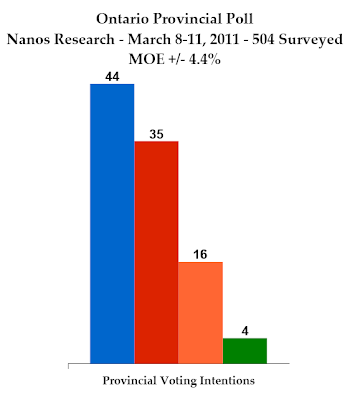 Compared to Nanos's last provincial poll conducted in early February, the Progressive Conservatives are up one point and now lead with 44%. More significant is the four point drop of the Liberals to 35%, though that is not a statistically significant drop.

Of course, a drop being statistically insignificant does not necessarily mean it isn't real.

The New Democrats are up three points to 16%, while the Greens are down one to 4%. 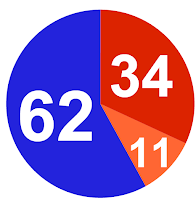 With the results of this poll only, ThreeHundredEight projects that the Progressive Conservatives win a majority government with 62 seats. That is unchanged from the projection for Nanos's last poll.

The Liberals, however, drop seven to only 34 seats. The New Democrats take up the slack, and would win 11.

Nanos also looked at what issues were in the minds of Ontarians. Healthcare is, unsurprisingly, at the top of the list at 31%. The Liberals hold the advantage on this file, as 25% of Ontarians believe they are the best to handle the issue, compared to 23% for the Progressive Conservatives.

Jobs and the economy is next at 15%, while high taxes is not far behind at 14%. Putting these together shows that money-related issues are a concern for about as many Ontarians as healthcare, and on this file the Progressive Conservatives are ahead: 33% on the economy and 38% on taxes. The Liberals follow at 22% and 20%, respectively.

Education is the top issue for only 7% of Ontarians, and again on this issue the Liberals are favoured: 27% to the PCs' 23%.

As to who would make the best Premier, Tim Hudak is the favourite at 27%, followed by Dalton McGuinty at 22%, Andrea Horwath at 10%, and Mike Schreiner at 3%.

This is less significant than it looks. If we take out the undecideds and none-of-the-aboves, we get 44% for Hudak, 35% for McGuinty, 16% for Horwath, and 5% for Schreiner. Aside from the Green result, those are the exact same numbers as for provincial voting intentions.

Of course, with a federal campaign likely to start at the end of next week the provincial campaign in Ontario will take a back seat. The Progressive Conservatives were planning a big get-together at the end of April to go over their platform, but the importance of the event will have to be minimized.