With a stellar poll for them from Ipsos Reid (poll summary coming later this morning), the Conservatives have made a few gains in Ontario and Quebec and now stand to win 152 seats in Canada.

UPDATE: My apologies, I missed a Conservative gain in Quebec earlier. It is now fixed.

The Bloc Québécois is unchanged at 9.9% nationally, and are down one seat to 51 seats in Quebec.

The Conservatives have made gains in every part of the country except Alberta, and are up half-a-point in both Ontario and Quebec. Their biggest gains come in the Prairies and British Columbia.

The Liberals were relatively soft throughout Canada, but did not suffer any particularly crippling losses. Their gain in Alberta, where they now stand in second with 18.6%, is beginning to put them in range in Edmonton Centre.

The New Democrats were very stable in Central and Eastern Canada, but dropped in the Prairies and British Columbia, while the Bloc Québécois holds a steady lead with 39.6% in Quebec.

Two of seat changes came in Ontario, as the Liberals have lost Brampton West to the Tories, and Sault Ste. Marie has gone back to the Conservatives after a few days in the NDP fold. These are both new seats for the Conservatives, as they voted Liberal and NDP in 2008. In Quebec, the Tories have also taken back Roberval - Lac-Saint-Jean.

Note that I have now included a "Held" column in the riding projection chart, showing which party held the riding at dissolution (I may be getting ahead of myself, but the government should fall this afternoon).

Also, I'm very happy to announce that I will be working with Le Devoir throughout the campaign, as well as The Globe and Mail. For my francophone readers, Le Devoir will be featuring my projections on a daily basis on their website, with a short accompanying text. On Saturdays, the paper edition (as well as the online edition) will feature my projection with a longer analysis. For that reason, don't expect projection updates here on ThreeHundredEight.com on Saturdays, particularly as the projection in Le Devoir on Saturday will be the same as the one on Friday.

With The Globe and Mail, my projection will be featured on their website on Sundays and in the paper edition on Mondays, as they have been now and then since October 2010. The Monday projections posted here will be those provided to The Globe and Mail, so they will not reflect any polls released Saturday evening or throughout Sunday. 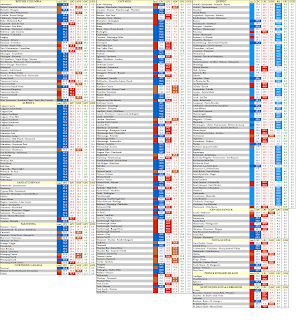