Yesterday, Léger Marketing released its Canada-wide poll on federal voting intentions. We don't often hear from Léger when it comes to polls conducted outside of Quebec, the last one having been released seven months ago. But this new poll points to something several polls have indicated recently: the Conservatives are straddling the line between a minority and a majority of the seats in the House of Commons. 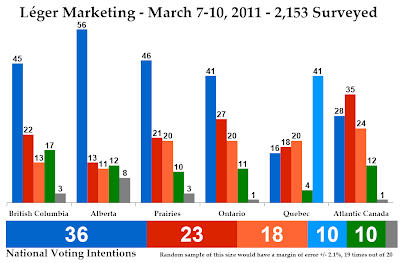 Compared to that last poll conducted in August 2010, the Conservatives have slipped only one point and now lead with 36%.

The Liberals have dropped five points and are down to 23% support, a shift that is well outside the standard sampling margin of error of these two Léger polls.

The New Democrats are up two points to 18%, while the Bloc Québécois and Greens are tied at 10% apiece.

A random sample of this size would normally have a sampling margin of error of +/- 2.1%, 19 times out of 20. Léger, however, uses an online panel. But it was apparently recruited randomly so it is difficult to classify.

It isn't the Conservative result that is good here. After all, 36% is less than what the party had in 2008 and support levels in every part of the country are generally where they were on election night. It's the weakness of the Liberals that boosts the value of this Tory result, as the Liberals are 13 points behind the Conservatives nationally and, more importantly, trail by 14 in Ontario.

There, the Conservatives are unchanged since August 2010 at 41%, but the Liberals have dropped seven points to only 27%. The New Democrats take advantage, and are up two points to 20%. The Greens are at 11% here.

In British Columbia, the Conservatives slip three points but still have things well in hand at 45%. The Liberals are up three to 22% but the NDP is down six to 13%, a disastrous result for them. They've yielded third place to the Greens, who jump six points to 17%.

The Conservatives and Liberals each drop two points in the Prairies to 46% and 21%, respectively. The NDP is down three to 20%.

In Atlantic Canada, the Liberals have decreased eight points to 35%, but are still ahead of the Conservatives who are at 28% (+4) and the NDP at 24% (+4). Actually a good result for the NDP out east.

Léger polled Quebec in far greater detail, breaking things down as they usually do by language and region. In the province as a whole, the Bloc Québécois is up two points from the last poll conducted in Quebec in early February. They now lead with 41%. The NDP is up one point to 20%, while the Liberals and Conservatives are each down two points to 18% and 16%. That the NDP is now the top federalist party is remarkable. 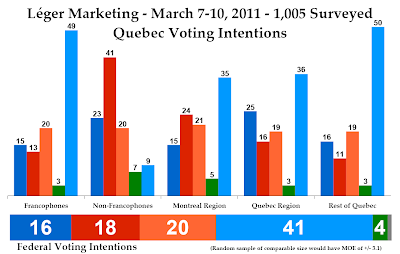 The Bloc leads among francophones with 49%, up three points from February. The NDP is up one to 20%, while the Conservatives are steady at 15%. The Liberals have dropped three points to 13%, and appear not to be a factor in francophone Quebec.

Among non-francophones, however, the Liberals still lead with 41% (+5). The Conservatives are down five to 23% (bad news for Larry Smith), while the NDP is up one to 20%.

In Quebec City, the Bloc has roared ahead with a seven point gain. They now lead with 36%. This echoes the recent Léger poll conducted in the Quebec City region, but doesn't show as large a lead as that poll did. The Conservatives are down nine big points to 25%, while the NDP is down two to 19%. Up five are the Liberals, at 16%.

Finally, outside of these two cities the Bloc dominates with 50% support, up seven points. 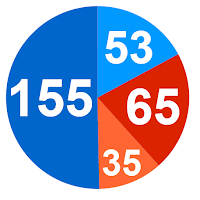 With the results of this poll only, ThreeHundredEight projects 29 seats for the Conservatives in British Columbia, 27 in Alberta, 22 in the Prairies, 61 in Ontario, eight in Quebec, and seven in Atlantic Canada for a total of 155. That is just barely enough to have a majority.

The Liberals win five seats in British Columbia, none in Alberta, two in the Prairies, 27 in Ontario, 11 in Quebec, and 19 in Atlantic Canada for a total of 65 - worse than the 2008 result.

The New Democrats win two seats in British Columbia (that 13% kills them), one in Alberta, four in the Prairies, 18 in Ontario, three in Quebec, and six in Atlantic Canada for a total of 35 seats. In case you're wondering, that third Quebec seat is Hull-Aylmer.

There are also a few questions about arena funding and satisfaction with the government, which I invite you to check out in the PDF. The Quebec provincial poll results will be dealt with in a separate post later this week.

More fuel for the fire, as it were. As occurred when Michael Ignatieff told Stephen Harper that his time was up back in 2009, the talk of an election has pushed Liberal numbers down. Recent controversies have yet to be fully recorded in polls, though Léger seems to suggest that they haven't taken hold - not yet, perhaps.

I tend to share the Liberal view that they have a good chance of improving their numbers once the campaign begins. Despite all his efforts, Ignatieff is still relatively unknown. Once he is on the television every day, presents a platform, and takes part in the debates (and I suspect he will do well), Canadians will then either reject or embrace him. At this point, I don't think they have done either just yet.
Posted by Éric at 11:01:00 AM