Liberals see an uptick in vote, Bloc gains a seat

Nanos Research's daily tracking has already come up with its first little shift, putting the Liberals within seven points of the Conservatives. And when we add the riding polls recently released by Segma Recherche, the result is a better situation for both Michael Ignatieff and Gilles Duceppe.

Nationally, the Conservatives are unchanged at 38.6%, where they have been for a few days. However, they are down one seat and are now projected to win 150. The Liberals, meanwhile, are up again and now stand at 27.3%, up 0.4 points from yesterday. They are still projected to win 73 seats.

I will be reserving most of my longer-view reflections on changes in the projection to my articles in Le Devoir and The Globe and Mail each weekend, which will be comparing week-to-week changes. But during the campaign, I will also take the time to look at campaign-wide trends once we are a few more weeks into the race.

Regionally, the Conservatives have moved very little. They are up a smidgen in British Columbia and Quebec, but also made a decent 0.3 point gain in Ontario. They now stand at 42.2% in that province.

The Liberals made small gains in Quebec and British Columbia, but also jumped 0.7 points in Atlantic Canada at the expense of the NDP. They are now only 1.2 points behind the Tories in the region.

The New Democrats dipped in Quebec and Ontario by 0.3 points, which is very problematic for them. They can't afford to drop that much when they are below 17% in those provinces.

The one seat change took place in Quebec. The Conservatives are now projected to lose Beauport - Limoilou, represented by Sylvie Boucher. Michel Létourneau, the Bloc candidate in this Quebec City riding, is now projected to be ahead.

A full report on the Nanos and Segma polls will be up later today.

Note that yesterday's Nanos poll is highlighted in blue in the charts at the bottom of this page, and has been given a weight of zero in the projection. That is because today's tracking poll incorporates two of the three days that yesterday's poll included. Once the Nanos tracking poll is reporting on three completely different days than their first poll, the older poll will be given its appropriate weight and returned to the model. 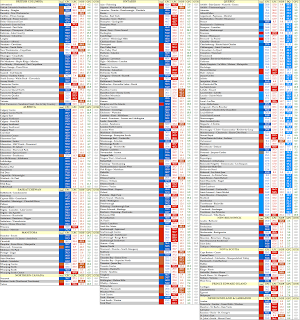