A lot of ink was spilled over the newest Ipsos Reid poll released yesterday through Postmedia and Global Television, as it put the Conservatives ahead by, oh, 19 points. But, looking at it more closely, it isn't nearly as remarkable as it might appear at first glance. 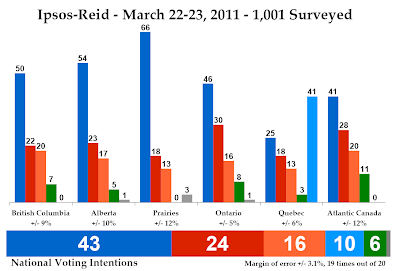 Compared to Ipsos's last poll conducted in early March, the Conservatives have gained three points and now lead with 43%. The Liberals, meanwhile, are down three points to 24%.

Neither of these two shifts are statistically significant, though that doesn't necessarily mean they are false. But Ipsos had the Conservatives at 43% back in late February, and then dropping down to 40% in early March, so this isn't a breakthrough poll for the Conservatives or any sort of Ipsos-trend. Their numbers are just wobbling back and forth.

The New Democrats are unchanged at 16%, while the Bloc Québécois is down one to 10% and the Greens are up one to 6%.

Of those who are absolutely certain to vote, 45% will vote for the Conservatives. Only 23% will vote for the Liberals, 15% for the NDP, 10% for the Bloc, and 7% for the Greens. Of course, the sample size of those likely to vote is about half of this entire sample, increasing the sampling margin of error to over +/- 4%.

Regionally, there is little change in Ontario. The Tories are up, however, gaining three points to lead with 46%. The Liberals are down two to 30%, while the NDP is up one to 16%. This is an important number for the Conservatives.

In Quebec, the Bloc has dropped five poins but still leads with 41%. The Conservatives are up 10 points (a statistically significant gain) to 25%, and lead the Liberals who are down three to 18%. The NDP is down one to 13%.

In British Columbia, the Conservatives are steady at 50%. While a big number, we've seen other results with the Tories about this high in the province. The Liberals are down six to 22%, the NDP is up one to 20%, and the Greens are up four to 7%.

But then the government's numbers in the Prairies are high as well: 66%. That's a gain of 15 points. The Liberals are down 17 points to 18% while the NDP is steady at 13%. Chalk that one up to the 54 people surveyed in the two provinces.

Finally, in Atlantic Canada the Tories have gained six points and lead with 41%. The Liberals are down four to 28% and the NDP is up four to 20%. This isn't the first time we've seen the Conservatives ahead out east. 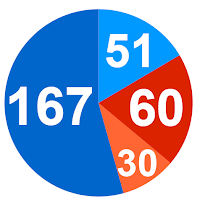 Not surprisingly, this one poll is enough to give the Conservatives a majority. With this poll only, ThreeHundredEight projects 25 seats for the Conservatives in British Columbia, 26 in Alberta, 24 in the Prairies, 63 in Ontario, 11 in Quebec, and 17 in Atlantic Canada for a total of 167, a gain of 13 over Ipsos's last poll.

The Liberals win five seats in British Columbia, one in Alberta, two in the Prairies, 28 in Ontario, 12 in Quebec, and 11 in Atlantic Canada for a total of 60, a drop of 11.

The NDP wins six seats in British Columbia, one in Alberta, two in the Prairies, 15 in Ontario, one in Quebec, and four in Atlantic Canada for a total of 30, a gain of four.

So, a remarkable result for the Conservatives. But it is just one poll. We'll see how things change in the next 100-150 polls due to be released in the next six weeks.

Ipsos did look at a few other issues, including how Canadians view the budget. About 19% give it a thumbs-up, about 16% give it a thumbs down, and 48% shrug. Those terms are how Ipsos has effectively characterized it.  Surprisingly, even 42% of Conservatives only have one thing to say about the budget: "meh".
Posted by Éric at 2:00:00 PM