Positive signs for the Liberals in new projection

Baby steps, but the Liberals have their first set of good news this morning. The party has made small but encouraging gains in most parts of the country.

The newest Nanos/CTV/Globe poll, while not spectacular for the Liberals, does put them in a better position than some of the other polls we have seen lately. This new poll has been added to the projection, as have the older regional results from the Harris-Decima poll released earlier this week. In anticipation of my full poll summary later today, I invite you to look at the findings of the polls at the links provided above.

The Conservatives remain firmly in control. They are unchanged from yesterday's projection of 38.6% support and 151 seats. The Liberals have picked up one seat from the New Democrats in the projection, as well as 0.2 points. They now stand at 26.9% and 73 seats.

When we look at the projection breakdown regionally, we can see that today's projection is a much better one for the Liberals. They are up 0.4 points in British Columbia and Alberta, and have closed the gap by 1.3 points in Atlantic Canada. The gain in Quebec is also very important.

For the Conservatives, they did not have much change. They were down a little out west but did make a gain in Ontario. At 41.9%, they are certainly in a strong position in the most important of electoral battlegrounds.

For the New Democrats, they had the tiniest of growth but growth nevertheless in five of the six regions. Most promising is the gain in Ontario, where they stand at 16.7%. They also continue to grow relentlessly in Quebec, and are now at 14.8%.

The only seat to change hands in the projection is that of Vancouver - Kingsway. The Vancouver riding is an NDP seat represented by Don Davies. The seat is one of those that has gone back and forth in the projection, and now Liberal candidate Wendy Yuan is projected to have the lead once again.

On a personal note, my apologies for the lateness of today's update. When I went to bed last night there were no new polls on the horizon, so it did not seem necessary to wake up as early as I have been doing so far in the campaign. But now that we can be sure of a daily Nanos poll (as they are starting their daily tracking), I'll be up at the crack of dawn to try to get these projection updates up before 8am. 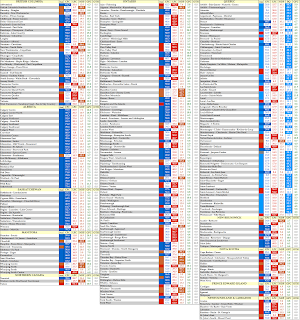