I only have one poll to report today, but the graphic you see below is how I intend to present the many polls that will probably be released each day during the campaign. I've included the latest Nanos poll in the graphic to provide you with a better idea of what to expect.

Compared to their last poll conducted at the end of February, there is very little change to report in the newest release from Harris-Decima. But a longer view shows us that Harris-Decima is showing the Tories as losing support steadily. 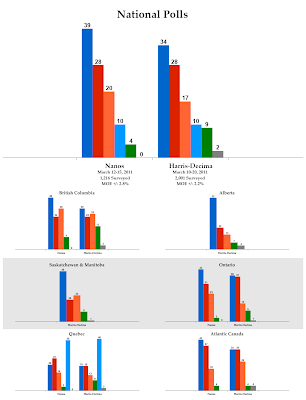 Though the party is only down two points from that last poll, and leads with 34%, they are down three points from early February. Again, this is not a very statistically significant change, but it is a mini-trend for Harris-Decima. Throughout it all, the Liberals have been relatively steady and remain unchanged from last time at 28%.

The New Democrats are up two to 17%, while the Bloc Québécois is up one to 10% and the Greens are unchanged at 9% in this telephone survey.

There hasn't been much change in Ontario, where the Conservatives are down one to 38%. But if we stretch that back to early February, this is a five-point drop. The Liberals are steady at 37%, while the NDP is up one to 15%. Harris-Decima is showing a much closer race in Ontario than other pollsters.

Harris-Decima also shows a closer-than-usual race in British Columbia, something that hasn't changed for the polling firm since February. They peg the Tories at 30% in the province, down one, while the NDP is at 26% (-5), the Liberals are at 24% (-3), and the Greens are at 17% (+7).

And in Atlantic Canada, there has been very little change. All three major parties are up a point, with the Conservatives and Liberals tied at 34% and the NDP at 24%. 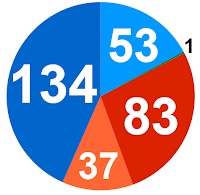 With the results of this poll only, ThreeHundredEight projects 14 seats for the Conservatives in British Columbia, 26 in Alberta, 22 in the Prairies, 49 in Ontario, nine in Quebec, and 13 in Atlantic Canada for a total of 134. That is a drop of four from last time.

The Liberals win nine seats in British Columbia, one in Alberta, two in the Prairies, 44 in Ontario, 12 in Quebec, and 14 in Atlantic Canada for a total of 83, a gain of two.

The Bloc Québécois wins 53 seats in Quebec, a gain of three from Harris-Decima's last poll.

The New Democrats win 12 seats in British Columbia, one in Alberta, four in the Prairies, 13 in Ontario, one in Quebec, and five in Atlantic Canada for a total of 37, an increase of two.

Finally, the Greens win one seat in British Columbia, unchanged from last time. André Arthur, however, is not re-elected in Portneuf - Jacques-Cartier, as he would have been in Harris-Decima's last poll.

So, a glint of sunshine for the opposition parties. Perhaps the Tories aren't so close to a majority after all. But the campaign has just begun, and this poll was taken before this surprising week. Nanos and Harris-Decima provide us with a nice starting point from which to look at this campaign, but all in all, the parties seem to be exactly where they were in 2008.

Note that this poll was included in this morning's projection. The poll summaries will always include only the polls that have been included in the projection each day.
Posted by Éric at 2:01:00 PM