Last week, Angus-Reid released the results of their Premier approval ratings poll. I took a look at this poll back in early December, and it seems like a good idea to follow-up.

Brad Wall is the most popular premier in the country, with 63% of people in Saskatchewan approving of his performance as leader. Next most popular is the new premier in Newfoundland & Labrador, Kathy Dunderdale, at 55%. Not surprisingly, Quebec premier Jean Charest is the least popular at 13% approval. 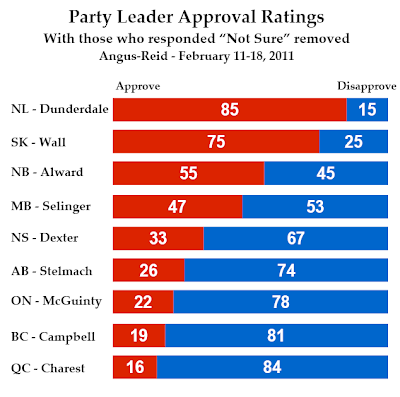 But, like last time, we get a different picture when we remove the "not sures". And why not? This is done with voting intentions.

When we include only those who have an opinion, Kathy Dunderdale becomes the most popular premier with 85% of decided Newfoundland & Labradorians approving of her performance. That is an improvement over the 81% Danny Williams had in mid-November, Angus-Reid's last poll looking at the approval ratings of premiers.

Wall is second with 75%, an increase of four points.

David Alward, who took over the helm of New Brunswick after winning the election in September, is at 55%, down two points from November, when he had barely gotten his feet wet.

After these three (conservative) premiers, we get into the sub-50% range. Greg Selinger of Manitoba is first among those who have a negative rating, with 47% approval. That is an increase of five points, however.

Darrel Dexter, the New Democratic Premier of Nova Scotia, is the most improved in this poll with an increase of nine points. His approval rating now stands at 33%. That's not great, but it is far better than the 24% of November, and as politics splits three ways in Nova Scotia it isn't a bad place to be.

Ed Stelmach, who will not be Premier of Alberta by year's end, is at 26%, down one point.

Dalton McGuinty remains unchanged at 22%, far below where his party has been polling in Ontario.

Gordon Campbell, recently replaced by Christy Clark, was at 19% in this poll, up one. I imagine the more popular Clark will improve these numbers significantly.

If we combine the totals of the conservative premiers (Campbell, Stelmach, Wall, Alward, Dunderdale), we get an approval rating of 52%. For the two NDP premiers (Selinger and Dexter), the average approval rating is 40%.

For the Liberals (McGuinty and Charest), the average rating is a dismal 19%. However, Robert Ghiz in Prince Edward Island is quite popular, and if we add his numbers from the latest Corporate Research Associates poll to the Liberal pile, the average result is bumped up to 34%.

So, what does this say about the future of each of these men and women? Alward, Dexter, and Charest will not have to face the electorate for at least a year, while Campbell and Stelmach can retire quietly. Wall and Dunderdale are almost assured to win their provincial elections this year, while Selinger will apparently have a close fight on his hand in Manitoba. In Ontario, McGuinty desperately has to improve his numbers.

From a federal point of view, these sorts of numbers bode well for the Conservatives. Their provincial counterparts all have a solid base of support. The NDP, too, have some relatively tolerated premiers to fall back upon, but the Liberals need to differentiate themselves from the Liberal regimes in Ontario and Quebec. The latter will not be too much trouble as the two parties aren't affiliated, but the dividing line is far murkier in Ontario.
Posted by Éric at 11:01:00 AM