The polls that came out yesterday were not nearly as disatrous for the Liberals as those that had come out over the weekend and in the week prior. Nevertheless, in polls conducted by Harris-Decima, Abacus Data, and Forum Research, the Conservatives are holding a distinct, and in some cases definitive, advantage. 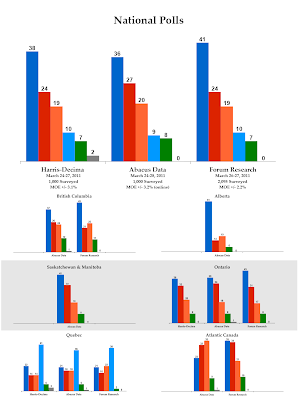 These polls were all conducted in part or wholly after the government fell on Friday, so these are truly the campaign's first opinion polls. Harris-Decima, Abacus Data, and Forum Research are the first in the field, or at least the first to report.

Abacus Data, of course, is an online pollster while Forum Research, a newcomer to federal polling, uses an IVR system similar to the one EKOS Research uses. They've been kind enough to provide me with their regional breakdowns and allow me to report on the results. Note, however, that they combine Alberta and the Prairies, so I won't be able to use those results in my projection.

Generally speaking, the New Democrats are doing very well in these polls. In the past, we have always seen them lower than 18% but it seems that since the campaign has started they are much closer to the 20% mark.

Harris-Decima and Abacus Data are also reporting a closer race in Ontario than some of the other recent polls, though Forum Research sees the Tories with a significant lead.

Another new trend is in Quebec, where the Conservatives are doing much better than their federalist counterparts. The Tories were running second in the polls reported on yesterday, and are second in most of these polls as well. The Liberals are at or below 18% in all of them. Worrying news for Michael Ignatieff if that is truly the case.

Now, the Harris-Decima poll does show some relatively significant movement: a drop of four points by the Liberals and a gain of four by the Conservatives. But this isn't stark enough to truly be statistically significant, and in fact what Harris-Decima is reporting is that the Conservatives and Liberals have returned to the levels of support the polling firm recorded in and prior to early February.

As for Abacus, no national variations have been larger than two points (-2 for the Tories, +2 for the Liberals and NDP), meaning there isn't much change going on. What is interesting is that Abacus broke the vote down by several different factors, including immigrants. Among immigrants, the Liberals lead with 38% to the Tories' 32%. If I can paraphrase that infamous report on Conservative strategy mistakenly handed to the NDP correctly, the Tories seem to still be losing, but are not losing as badly as they used to.

Broken down by likely voters, the Liberal total actually improves to 29%. But the Conservatives stand at 37% and the NDP at 20% among likely voters.

Forum Research's regional results did not differ much from the other pollsters, though the NDP at 22% in Quebec is unusual. The polling firm also reported on GTA numbers, and found that the Conservatives are leading with 40%, compared to 32% for the Liberals and 22% for the NDP.

Forum Research included the "Best PM" question, and found that Stephen Harper is tops with 38%. Jack Layton followed with 18% while Michael Ignatieff stood at 14%. That is, generally speaking, what other firms have found to be the case.

On a few issues, Forum Research asked whether respondents approved or disapproved. Only 37% of Canadians approved of reducing federal taxes for corporations, while 40% approved of spending $9 billion (?) on F-35 fighter jets. This generally aligns with Conservative levels of support.

Perhaps most interestingly, Forum asked whether the economy and job creation was more important than ethics in government. Only 38% disagreed.
Posted by Éric at 12:48:00 PM