NDP out of the race in Gatineau?

No federal polls were released yesterday, which shouldn't come as any surprise. The campaign is virtually scheduled to properly start on Saturday, so expect an onslaught of polls beginning next week.

Meanwhile, a poll conducted by Segma Recherche for Le Droit and 104.7 CKOI for the two Gatineau ridings of Hull-Aylmer and Gatineau show that the New Democrats may not actually be ready for a breakthrough in the Outaouais. 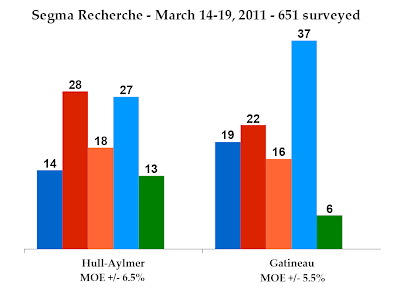 Riding polls always need to be taken with a grain of salt - it is more difficult to nail down a representative sample and the margin of error is relatively large: 6.5% for Hull-Aylmer and 5.5% for Gatineau. In addition, candidates for every party have not been nominated. Nevertheless, Segma was not far off on most of its 2008 riding polls, so we should take these results at face value.

We'll start with Hull-Aylmer, which has been a Liberal stronghold since the dawn of time. It hasn't always been an easy win for the Liberals, as in 2006 the Bloc Québécois came within four points of taking the riding. But in 2008, Marcel Proulx was re-elected with 37% of the vote.

According to this poll, that has dropped to only 28%. The Bloc has increased its vote to 27%, about where they were in 2006.

The New Democrats are at 18%, just about where they were under Pierre Ducasse, who had run for the leadership of the party back when Jack Layton was awarded the role. Ducasse will not be running again for the NDP in Hull-Aylmer, instead replaced by Nycole Turmel. The Conservatives are also steady at 14% (they had 15% in 2008), while the Greens appear to have made some in-roads, standing at 13% (instead of 5%).

Of course, the MOE needs to be taken into account and the Green boost could be illusory. If that Green support reverts to the Liberals, Proulx should be re-elected. If not, the Bloc could pull an upset.

On to Gatineau. This is considered to be one of the ridings to watch, as the Bloc eked out a victory in 2008 with 29% of the vote, ahead of the NDP at 26% and the Liberals at 25%. Segma, however, doesn't see the race as so close.

Instead, Richard Nadeau looks to win the riding for the Bloc again very easily, with 37% of the vote. This is not a very surprising number, as Nadeau had taken roughly 40% of the vote in the 2004 and 2006 elections.

What is surprising is the drop of the NDP. They are down to 16%, despite Françoise Boivin being tauted as the next great Quebec NDP MP. Instead, the Liberals and their candidate Steve MacKinnon are running second at 22%, still a drop for them.

It is difficult to believe that the NDP is not in the running in Gatineau, but there you have it. If the NDP can't win Gatineau it is hard to locate another riding that they could win in Quebec, especially since Hull-Aylmer was definitely in their top five.

Note that I will be including riding polls in my projection. Because they have large MOEs and rarely will we have corroborating evidence through subsequent polls in these ridings, riding polls will be given a relatively low weight in each riding projection: 25%.

This Segma poll was included in yesterday's projection, and I accordingly have the Liberals leading in Hull-Aylmer with 34%, followed by the Bloc at 23% and the NDP at 19%. In Gatineau, I have the Bloc in front with 31% to the NDP's 25% and the Liberals' 23%.

The Outaouais will certainly be a region to watch on election night. Gatineau was supposed to be the close race, but Hull-Aylmer could turn out to be the nail-biter.
Posted by Éric at 8:10:00 AM