On Saturday, Le Soleil reported on a new Segma poll, conducted from March 21 to March 24 (the day before the budget to the day before the government fell). Unfortunately the details on riding results were scant, but what the poll does show is that the Conservatives have given up the lead in the Quebec City region to the Bloc Québécois. 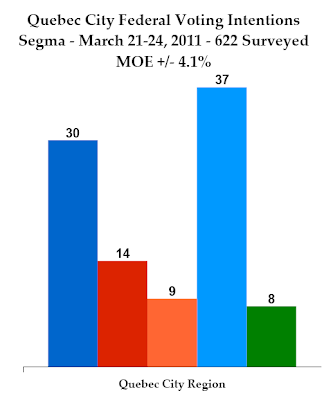 Though showing little change from Segma's last poll conducted in January, this poll puts the Bloc at 37% in the region, up four points from their 2008 level of support (according to the accompanying article). The Conservatives, meanwhile, have dropped six points and now trail with 30%.

The Liberals and New Democrats follow with 14% and 9% support, respectively. They aren't in the race.

Revealingly, Segma asked respondents which leader they felt could best move forward issues pertaining to Quebec City. It was Gilles Duceppe who came out on top with 39%, followed by Stephen Harper with 24%. Jack Layton was at 10%, while Michael Ignatieff was only at 8%.

But it is remarkable that residents of Quebec City seem to be turning away from Harper after five years. Though 45% of respondents said that the Conservatives had delivered for the region, it appears that not one in four believe that Harper is willing to continue favouring the city in the future. It does not bode well for the fortunes of the Conservative MPs in the region, and in Quebec as a whole.

And this poll reflects that, as it only puts Josée Verner in Louis-Saint-Laurent ahead of the Bloc, with 38% to 29%. Both Sylvie Boucher in Beauport - Limoilou and Daniel Petit in Charlesbourg - Haute-Saint-Charles trail their Bloc opponents in this poll, though caution is needed. While the MOE is 6.7% in Louis-Saint-Laurent, it is almost 10% in the other two ridings.

Nevertheless, this is a very troubling poll for the Conservatives. Recent results from CROP have also shown that the Tories are trailing in their one area of strength in Quebec. Though Tory growth in other parts of the country could compensate for the loss of a few seats in and around Quebec City, it really isn't anything the Conservatives can afford at this point.

If you missed them earlier, you can scroll down to read today's poll summary and projection update details, or read them here and here.
Posted by Éric at 4:33:00 PM