A new, and very interesting, flash poll by Léger Marketing conducted for a few radio stations in Quebec City (including FM93, a radio station that invited me to speak with them last month, though I'm not sure if the interview is still somewhere on their site) shows that the Conservatives have tanked in the Quebec City region, and are now at risk of losing two and maybe even all three of their seats in the Quebec City region (north of the St. Lawrence). 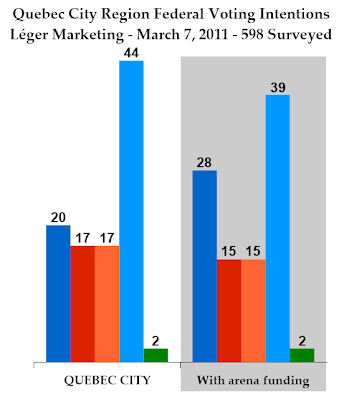 This online poll (though Léger has a randomly chosen panel) was taken on March 7th only. I usually look a little askew at one-day polls.

But according to the results, the Bloc Québécois is leading in the region with 44%, well ahead of the Conservatives who are at 20%. Even they aren't far ahead of the Liberals and New Democrats, who each have 17% support.

While shocking to see the Conservative base here fall away in Quebec City, the findings of the Léger poll give a partial explanation as to why this is the case.

Well, by my estimation that would certainly put Beauport - Limoilou and Charlesbourg - Haute-Saint-Charles in the Bloc's column, along with André Arthur's riding of Portneuf - Jacques Cartier. That would leave Josée Verner in Louis-Saint-Laurent as the only Conservative MP from Quebec City, aside from Jacques Gourde and Steven Blaney across the river in Lotbinière and Lévis. I already have the Conservatives losing Montmagny to the southeast of the city, and this poll only makes that call more likely.

But even Verner would be in trouble, as I have her only holding on to her riding by her finger nails with these numbers/

The Conservatives can't even turn things around dramatically if they do decide to provide funding for the arena. According to the poll, with federal funding for the arena the Bloc would still have 39% support, well ahead of the Conservatives at 28%. That does bring the Tories back up to about where they were in 2008, but the Bloc is in a better position. That still means Arthur could be out, as well as Sylvie Boucher in Beauport - Limoilou.

This is bad news for the Conservatives. They appear to be well in range of a majority, but only just. Losing a couple seats in Quebec City could be disastrous. And with the Speaker's two rulings against the Conservatives today, I have trouble believing that their numbers elsewhere in Canada are going to be able to make up for it.
Posted by Éric at 4:17:00 PM