CROP has never been very quick to release their polling data, but they have gotten better at it since they used to never release their data. This week, they finally released the full details of their poll conducted between February 16 and 21. Using what sparse information was available in media reports, I wrote about the federal results last week. You can take a look at the full CROP details here to see the regional breakdown for the federal parties, as well as the numbers for the provincial poll. 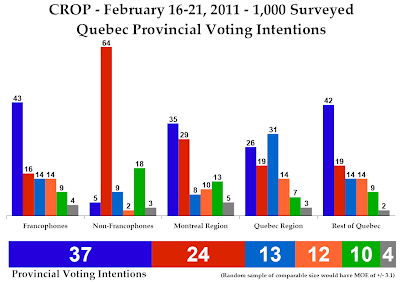 The provincial results show that the Parti Québécois continues to have things well in hand, while the Liberals are flirting with catastrophe.

Compared to CROP's last provincial poll taken before Christmas, the PQ has dropped four points to 37%. The Liberals, meanwhile, are down one point to 24%.

The Action Démocratique du Québec is down three points to 13%, while Québec Solidaire is steady at 12%.

The Greens are up four points to 10%.

Credit goes to CROP, who state that because they use an online panel the usual sampling margin of error does not apply.

The Liberals dominate with 64% among non-francophones, while the Greens are doing very well at 18%. Of course, that will get them nowhere.

In and around Montreal, the PQ leads with 35%, followed by the Liberals at 29% and the Greens at 13%. Québec Solidaire must be doing very well in the francophone parts of Montreal, as they are at 10% in the region but only at 2% among non-francophones (virtually all of whom live on the island). 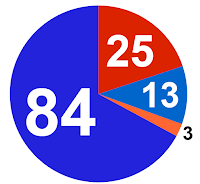 With the results of this poll only, ThreeHundredEight projects that the Parti Québécois would win 84 seats if an election were held during CROP's polling period. That is a gain of one over CROP's last poll in December.

The Liberals win only 25 seats, while the ADQ wins 13 (down two). Québec Solidaire wins three seats, all on the island of Montreal.

CROP also has Guy Rainville at 1%, though Rainville was replaced by Claude Sabourin as leader of the Quebec Green Party in the autumn of 2010.

Interestingly, it appears that the numbers for Marois, Charest, and Deltell are virtually the same as their parties' voting intention results. The only difference is Khadir. Québec Solidaire has some room for growth, which is quite astounding considering the party is already at three times the level of support the party had in the 2008 election.

CROP also asked Quebecers about whether they would support sovereignty (and not sovereignty-association, as they used to). Though sovereignty is often said to be dead in Quebec, CROP puts support at independence at 43%, which is where it has generally been for the last 30 years. It might not be kicking, but it certainly isn't dead.

Though Quebec does not need to have another election before 2013, I've heard many pundits say that the next vote will take place in 2012. That doesn't leave a lot of time for Charest to turn things around. If there is a silver lining for the Liberals, it is that Marois is not very popular and considering how badly things have been for the Liberals the PQ should be nearer to 50%, or at least the 43% supporting sovereignty. Their support is being eaten away by Québec Solidaire, another sovereigntist party, but the Liberals' silver lining is dulled by the fact that QS is unlikely to be a spoiler for the PQ in many ridings outside of Montreal, and in those ridings the Liberals do not stand much of a chance anyway.
Posted by Éric at 10:47:00 AM