The latest poll from Harris-Decima shows very little change over the last two weeks, exactly what their last poll indicated. In fact, at the national level, all of the parties are exactly back to where they were in Harris-Decima's mid-January poll. 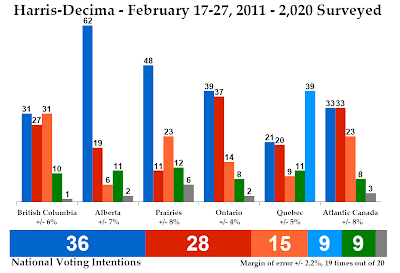 Compared to Harris-Decima's last poll taken February 17-27, the Conservatives have dropped one point but hold the lead with 36% support. The Liberals are up one point to 28%, while the New Democrats are also up one point to 15%.

The Bloc Québécois and Greens are each down a point to 9%.

This telephone poll has a margin of error of +/- 2.2%, 19 times out of 20. The margin of error for the Conservative lead of eight points over the Liberals is roughly 3.5%.

In Ontario, the Conservatives and Liberals are statistically tied at 39% and 37%, respectively. That is a drop of four points for the Tories and gain of three for the Liberals. The NDP is up two points to 14%, while the Greens are down two to 8%.

In British Columbia, the Conservatives are down four points to 31%, while the NDP is up 12 points to 31% as well. The Liberals are down two to 27%, putting all three parties in a statistical tie. The Greens are down six points to 10%.

In the Prairies, the Conservatives are unchanged at 48%. The NDP is up three points to 23% and the Liberals are down 11 points to 11%.

It would appear that the only statistically significant shifts in support are the Liberal drop in the Prairies, the NDP changes in British Columbia and Alberta, and the Green slip in BC.

With this poll, the national projection is bumped to 27.9% for the Liberals, 9.8% for the Bloc Québécois, and 7.5% for the Greens. The Conservatives and NDP do not change. 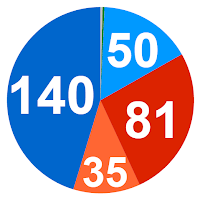 With the results of this poll, ThreeHundredEight's projection model awards 12 seats to the Conservatives in British Columbia, 28 in Alberta, 23 in the Prairies, 51 in Ontario, 11 in Quebec, and 13 in Atlantic Canada for a total of 140.

The Liberals win nine seats in British Columbia, none in Alberta, one in the Prairies, 43 in Ontario, 13 in Quebec, and 14 in Atlantic Canada for a total of 81.

The New Democrats win 14 seats in British Columbia, none in Alberta, four in the Prairies, 12 in Ontario, none in Quebec, and five in Atlantic Canada for a total of 35. Their BC result saves them here.

With the Conservative drop in British Columbia, Elizabeth May manages to eke out a seat win in Saanich - Gulf Islands, while the Bloc is not strong enough to topple André Arthur in Portneuf - Jacques-Cartier.

Also out this morning is a poll (February 24-27) by Harris-Decima on the economy. Interestingly, 36% of Canadians now believe the country is out of a recession, up from 19% in February 2010. Canadians are split between supporting the government continuing spending to create jobs (44%) and cutting spending to eliminate the deficit (48%).

Surprisingly, there is still a large portion of Conservative supporters (36%) who want the government to keep spending. And not as many NDP voters as you'd think (55%) agree.

I've heard from another pollster that these results from Harris-Decima are more in line with their numbers than the recent polls from Ipsos-Reid, Angus-Reid, and Abacus Data. I tend to agree that the recent Conservative spike was perhaps a little unrealistic. I expect that in the coming weeks more polls will put the Conservatives in the mid-to-high 30s rather than around the 40% mark. And whether the recent hubbub over election spending and the use by Jason Kenney's office of government materials for partisan fundraising will have any traction remains to be seen. I don't think it will - if the past year has shown us anything it's that the Conservatives are coated with teflon.
Posted by Éric at 10:22:00 AM