BC NDP and Liberals tied prior to Clark win

Shortly before the vote was held on who would become the next leader of the BC Liberal Party, two polls were leaked to the Vancouver Sun. One was by Abingdon Research and the other was done by Léger Marketing. As they were conducted for the losing Kevin Falcon camp, their focus was on the danger posed by choosing eventual winner Christy Clark. But the polls still did have some interesting numbers for the provincial and federal campaigns in British Columbia. 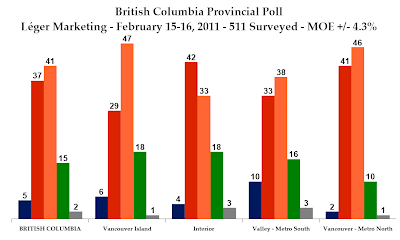 In the Léger poll, the BC New Democrats led with 41%, followed by the BC Liberals at 37% and the BC Greens at 15%. The BC Conservatives stood at 5%. Interestingly, both pollsters did not prompt for the "BC Conservatives", only "Other". If respondents chose "Other", they were then prompted with the BC Conservatives, independents, and the Libertarian Party.

The BC New Democrats have their strength concentrated on Vancouver Island, as well as in Vancouver itself and in the northern suburbs. The BC Liberals, on the other hand, a stronger in the Interior, in the Valley, and in the southern suburbs of Vancouver. The Greens are stronger away from Vancouver, while the Conservatives had their best result in the Valley - Metro South region. 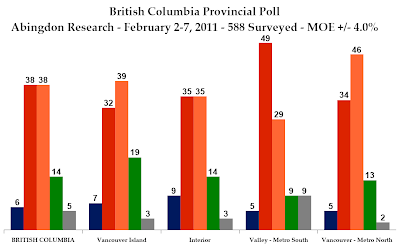 Abingdon Research had very similar results. While Léger had the two parties statistically tied, Abingdon put the BC Liberals and BC NDP at 38% each. The Greens followed with 14%, and the BC Conservatives stood at 6%.

Note that Abingdon Research's Chief Research Officer has a history with Angus-Reid and also did polling for the federal Conservatives in 2008, according to their website. I had not heard of Abingdon before this poll appeared, but as their results were within the MOE of Léger Marketing's I have no reason to consider these poll results anything other than reliable. 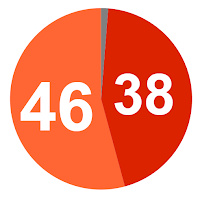 And that makes these polls little more than a look at what the situation was before the two leadership races. The BC Liberals have chosen Ms. Clark, while the BC New Democrats will make their choice in April. Ms. Clark has promised not to call a snap election at least until her chief opponent is chosen.

Abingdon also included some federal numbers in their poll. Not surprisingly, the Conservatives are well ahead at 44%, unchanged from their 2008 result. 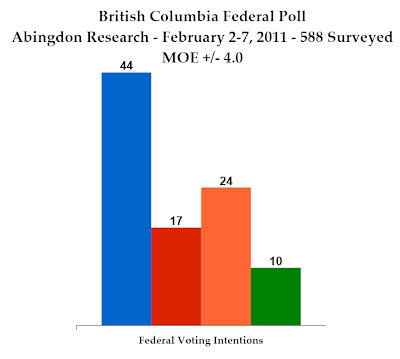 The New Democrats stand at 24%, while the Liberals are at 17%. Both of these results are also very close to the last election.
Perhaps the most interesting result in these two polls was the breakdown of BC Liberal voters. According to Abingdon, 67% of BC Liberal voters support the federal Conservatives. Another 22% support the Liberals while 4% support the NDP and the Greens each.
Provincially, that would give 25% to the Conservatives, 8% to the Liberals, and about 2% apiece to the Greens and New Democrats. In other words, half of federal Conservative and Liberal support in British Columbia is found in the BC Liberal Party, while the BC New Democrats are shedding about 2/5ths of their support to parties other than the federal NDP.
UPDATE: I neglected to add Angus-Reid's latest BC provincial poll to the pile. It was taken between February 15 and 17, and included 811 panellists.
The result was 41% for the BC Liberals, 38% for the BC New Democrats, 11% for the BC Greens, and 4% for the BC Conservatives. Considering the standard margin of error, this is yet another poll showing the exact same close race around 40%.
Note that Angus-Reid also polled supporters of each party for who they thought would make a good choice as party leader. Among BC Liberal voters, Ms. Clark got 67%, predicting her leadership win. Among BC NDP voters, the leader is Mike Farnworth at 59%, followed by Adrian Dix at 45%, a gap similar to the one Angus-Reid found between Clark and Falcon.
UPDATE (II): A commenter pointed out a poll from Forum Research, asking respondents how they would vote with Clark or Abbott as leader. Check it out here.
Posted by Éric at 2:27:00 PM