On Friday, La Presse reported on a new CROP poll, showing that the Bloc Québécois is well in front and that little change worth noting has taken place since their last poll conducted in mid-December. But the answers to the questions CROP asked about other issues were far more interesting. 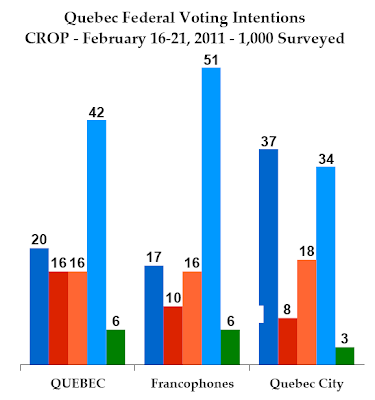 Following the guidelines of the MRIA and other polling bodies, Youri Rivest of CROP told Le Soleil that because of their online panel, no typical margin of error applies to his poll. Now, if only the polling firm was as open with the full details of their polling as they are with their methodological issues. Baby steps.

Unlike most reports on CROP polls, we do have some regional and demographic results. CROP puts the Conservatives at 37% in and around Quebec City, barely ahead of the Bloc at 34%. It's a tight race in the provincial capital, tighter than it was in 2008.

Among francophones, the Bloc dominates with 51% support. The Conservatives (17%), New Democrats (16%), and Liberals (10%) split the rest. The Liberals are really disappearing in francophone Quebec. 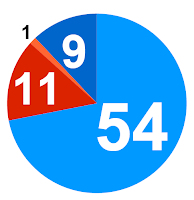 With these poll results, the Bloc Québécois would win 54 seats, the Liberals 11, the Conservatives nine, and the New Democrats one. That is a gain of two seats for the Bloc compared to CROP's last poll, the NDP and Liberals each losing one.

Considering the voting intentions of Quebecers, it should probably come as no surprise that 61% of respondents said they would be favourable to a Liberal and NDP coalition supported by the Bloc Québécois. Only 14% of Quebecers would be very opposed to it, which is likely why the Tories aren't banking on the coalition bogeyman in Quebec very much.

As are the demands the Bloc has made on the Conservatives for their support of the upcoming budget. Outside of Quebec, the Bloc has been pilloried for its budget demand of $5 billion. However, fully 70% of Quebecers think that these demands are justifiable.

These are good numbers for the Bloc to fish in, however they are not alone. The 61% favourable to a coalition has to be split among three parties, as does the 67% concerned with a Conservative majority. The remaining 30% to 40% of Quebecers are, thus, potential Tory voters. Stephen Harper already has the support of about half of this group, indicating that there is room for growth. But if the Bloc is able to capitalize on anti-Conservative sentiment, as it did in 2008, the party is in a stronger position to shut the Tories out than any of the others.
Posted by Éric at 9:18:00 AM