The latest CTV/Globe/Nanos poll shows very little change in the topline numbers, and even a downward trend for the Conservatives in the West. But Tory growth in Ontario puts Stephen Harper on the doorstep of a majority government. 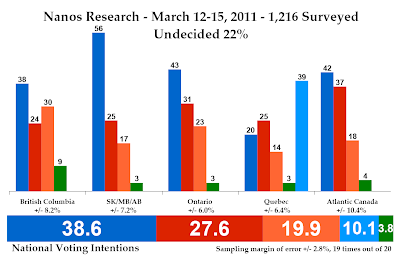 Compared to Nanos's last poll conducted in mid-February, the Conservatives have slipped 1.1 points to 38.6%, while the Liberals are up a point to 27.6%. That's a gap of 11 points rather than February's 13, but this variation is still within the margin of error of the two polls.

The New Democrats are up one point to 19.9%, their highest result from any pollster for some time, while the Bloc Québécois is up 0.2 points nationally to 10.1%.

The Greens are down 1.1 points to 3.8%, a very low result for them, even by Nanos's standards. Note that, unlike other pollsters, Nanos does not prompt any of the parties in their surveys, and that by now the poll is one week old. This telephone poll has a sampling margin of error of 2.8 points, and 22% of respondents were undecided (up from 18.8%).

Ontario is the big story of this poll, though the shifts are within the margin of error. Nevertheless, the Conservatives are up 4.2 points to 43.2%, making this the sixth straight poll putting the Conservatives at more than 40% in the province. The Liberals are down 1.9 points to 30.9%, while the NDP is down 0.4 points to 23%. Aside from the recent Léger poll, Nanos is the only pollster to have recently put the New Democrats at 20% or more in Ontario. The Greens are down 1.8 points to 3%.

The Bloc Québécois leads with 39.3% in Quebec, up two points from mid-February. The Liberals follow with 24.7% (+0.3), while the Conservatives are down 0.6 points to 19.6% and the NDP is down 2.9 points to 13.9%, still a good number for them. Give or take a few points, this is generally where the parties were in Quebec at the end of the 2008 election, but the slight increases in Liberal and New Democratic support mean seat gains, as noted below.

The Conservatives have dropped 7.1 points in British Columbia, and now lead with 37.5%. The New Democrats are up 8.4 points to 29.7%, while the Liberals are down 2.2 points to 24%. The Greens are up 0.9 points to 8.8%. Despite these wild variations, none of these are statistically significant.

Finally, Nanos still clumps Alberta, Saskatchewan, and Manitoba together. The Conservatives have dropped 9.1 points in the three provinces, and now stand at 55.5%. The Liberals are up seven points to 25%, and the NDP is up 4.2 points to 16.9%. 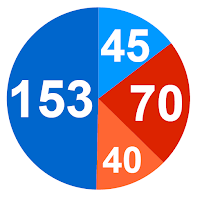 With the results of this poll only, ThreeHundredEight's model projects 19 seats for the Conservatives in British Columbia, 57 in Ontario, 11 in Quebec, and 15 in Atlantic Canada. I've awarded them the 50 seats in Alberta, Saskatchewan, and Manitoba that my official projection currently gives them. In all, that is 153 seats, two shy of a majority and six more than I projected for Nanos's last poll.

The Liberals win six seats in British Columbia, two in the Prairies, 31 in Ontario, 17 in Quebec, and 13 in Atlantic Canada for a total of 70. That is a drop of 14 seats from last time.

The Bloc wins 45 seats in Quebec, dropping two seats from their current standing in the House of Commons due primarily to local factors. It is also a four seat drop from the last Nanos projection.

The New Democrats win 11 seats in British Columbia, four in the Prairies, 18 in Ontario, two in Quebec, and four in Atlantic Canada for a total of 40, an increase of 12 from last time.

Nanos also looked at the leadership numbers for each of the party leaders, grading them on trust, competence, and their vision for Canada. Combining them determines Nanos's Leadership Index Score. Since mid-February, Stephen Harper has dropped 16.1 points on the LIS, and now stands at 82.8. He lost much of that, not on trust as you might suspect, but on competence.

Jack Layton is second with an LIS of 51.4, an increase of almost eight points, while Michael Ignatieff is up almost three points to 39.7.

As for the top issue for Canadians, it is still healthcare at 29%, an increase of six points since February. Jobs and the economy is second at 18% (-2), while education is third with 9% (+4). Of course, both education and healthcare are provincial concerns.

When it comes to what motivates Canadians to cast their ballot in favour of one party or another, 48% said they make their decision based on the parties' policies. Another 20% said that the leader is the most important factor, while only 12% based their decision on the local candidate. Another 10% said their voting behaviour is based on who they traditionally vote for. None of these numbers had significant regional variations, but they definitely show the importance of the national campaigns - it determines how 68% of Canadians vote (combining platform and leaders).

Two other questions Nanos asked are of interest. On the F-35 fighter jets, only 27% agreed that they should be purchased now, while 68% said that "now was not a good time". That opinion is even shared by 56% of Conservative voters.

But the question is less than perfect. Nanos mentions that the F-35 jets could cost as much as $30 billion, the number quoted by Kevin Page of the PBO. That's fine, but Nanos did not spell out that the $30 billion is spread out over several decades. Listening to the Nanos question, respondents might have thought that the $30 billion will need to be spent right now.

Finally, Nanos asked who Canadians trust on economic policy. The Conservatives lead with 30%, but the Liberals are not far behind at 21%. The NDP is at 16%.

This poll has a litle bit of something for everyone. For the Bloc, they look to hold on to their vote. For the NDP, they have the potential to reach 20%. For the Liberals, their Quebec number is good and Harper's lustre appears to be dulling a little bit. For the Conservatives, this is as good as a majority.

But I suspect that the Liberals have already made up their mind to vote down the government, while the Bloc is just waiting to see whether the $2.2 billion for the HST is in the budget. It probably won't be, which means the NDP is on the hook. The Conservatives have held out a small olive branch, but the NDP hasn't yet given any impression as to which way they are leaning. The budget, slated for 16h00 in Ottawa, will be one to watch.

There is a Harris-Decima poll lurking around out there, but it hasn't been posted on the Harris-Decima site just yet. It will probably be posted sometime today, so look for a report on the poll here tomorrow.
Posted by Éric at 9:40:00 AM