We're finally starting to get some new polls in addition to the very useful Nanos daily tracking. This morning the latest Harris-Decima was added to the projection (removing, where needed, the previous Harris-Decima poll that partly overlapped with some of the regional results in this newest release). The results of the update are a few seat gains for the Conservatives, and a few vote gains for the Liberals.

With a gain of two seats, the Conservatives now stand at 154, exactly half of the seats in the House of Commons. However, they have also dipped 0.2 points nationally to 38.6%. The Liberals, meanwhile, are unchanged at 71 seats but have gained 0.5 points (a relatively large gain in the projection). They now have the projected support of 27.6% of Canadians.

The Conservatives are relatively stable, not losing or gaining more than 0.2 points in any part of the country.

The Liberals, however, jumped everywhere. They had infinitesimal gains of 0.1 points in the Prairies and Quebec, decent gains of 0.4 points in Alberta and Ontario, and larger gains of 0.6 points in British Columbia and Atlantic Canada. While it did not translate into any extra seats, it puts them closer in a few. The gain of 0.4 points in Ontario is especially significant.

The New Democrats, like the Tories, were also pretty stable. But the drop of 0.4 points in the Prairies and 0.3 points in Ontario cost them a seat in each region.

The Bloc is up 0.2 points in Quebec to 38.8% after a few days of slow decline. They still hold a very large lead over the Conservatives and Liberals, larger than they had in 2008. 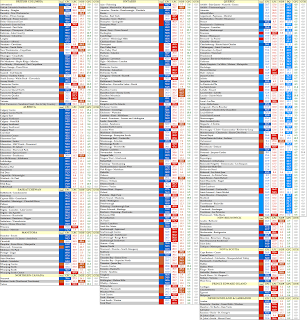