The four newest polls all show the same thing: the Liberals and New Democrats are now statistically tied at the national level while the Conservatives enjoy an unassailable double-digit lead. 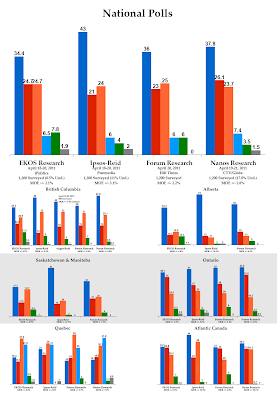 These polls from Angus-Reid, EKOS, Forum, Ipsos-Reid, and Nanos add more fuel to the fire as to whether this will be a historic election for the NDP and a historic defeat for the Liberals. But while all of this goes on at the margins, the Conservatives remain on track to win another minority - or even a majority.

The Ipsos-Reid poll for Postmedia grabbed the most attention yesterday, as it put the Liberals at an incredibly low 21%, behind the NDP at 24% and the Conservatives at 43%. There is little in other polls to argue that the Conservatives really are that far ahead, and when you compare it to Ipsos's last poll taken April 5-7 you see that the variation has been within the MOE.

That isn't the case for the Liberals and NDP, however, who are down and up five points each.

Far more interesting are the EKOS and Nanos polls, and how they have shifted over the last few days. EKOS's last poll was taken April 15-17, and since then the NDP has gained 4.7 points, mostly at the expense of the Conservatives (down three). In Quebec, the NDP is up six points while the Bloc is down 4.7.

Nanos shows something similar, with the NDP up 6.4 points over the last three days at the national level. However, Nanos has support being drawn from both the Tories (down two) and the Liberals (down 4.1). In Quebec, Nanos has the Bloc down 4.4 points and the NDP up 3.3. But unlike EKOS, Nanos still has the Bloc ahead of the NDP in Quebec.

All of these polls also show that the New Democrats are doing very well in British Columbia, though primarily at the expense of the Liberals. So let's take a look at how polling has evolved in the West Coast province since the start of the campaign. Generally speaking, the campaign in British Columbia has been relatively flat. Or at least it was until the 16th and 17th, the weekend immediately after the debate that coincided with the BC NDP's choice of a new leader.

The Conservatives have been humming along at a good pace around 42%. For much of the campaign the Liberals and NDP have been locked in a battle for second, but the Liberals had the upper-hand.

But over the last weekend that shifted, and the Liberals dropped from roughly 25% to around 19%, generally where they were in 2008. The NDP has jumped up to over 27% support in the province, meaning the NDP is set to improve upon its 2008 performance. 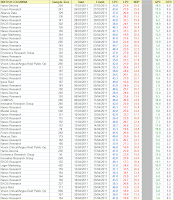 You can click on the chart to the left for the detailed breakdown of all polls conducted in British Columbia since the campaign began.

Along with the Liberals, the Greens have been struggling in what is supposed to be their best province. From the 12% range where they were when the campaign began, the party has sunk consistently. In today's Nanos they were at only 4%, but over the last few days they've averaged about 7%. That is still worse than 2008, and does not bode well for Elizabeth May's chances in Saanich - Gulf Islands. Gone are the days when the Greens routinely polled over 15% in the province.

While the polls haven't changed too much in British Columbia since the 2008 election, some of the personnel changes that have taken place in the province (Keith Martin, Bill Siksay, Jay Hill, Chuck Strahl, Stockwell Day, etc.) mean the people that British Columbians send to Ottawa won't be the same. And the retirement of these MPs, some of them in some close races (Esquimalt - Juan de Fuca and Burnaby - Douglas in particular) does make the potential outcome in the province difficult to predict.
Posted by Éric at 2:32:00 PM