Change in BC, Ontario, and Quebec - or statistical wobbling

Four new polls out today, from Angus-Reid, EKOS Research, Environics, and Nanos Research, all have slightly different stories to tell. But what we can see across three or all four of these polls is much more interesting. 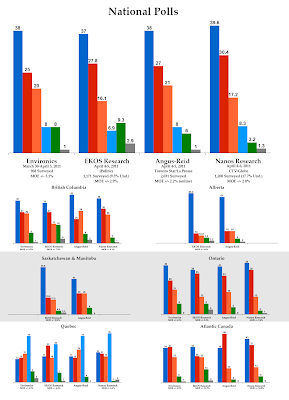 Nevertheless, there are some consistencies across these polls.

In Ontario, the three polls taken over a shorter period of time and more recently show a close race between the Conservatives and the Liberals. Only Environics, which polled over a longer time, appears to still be tracking the earlier, wider gap that existed between the two parties. However, despite the close race, the Conservatives still hold the advantage. There seems to be little indication that they are going to be giving it up any time soon.

In Quebec, steady Quebec, changes are taking place. But first a quick word about EKOS finding the Bloc Québécois at only 28.3%. That is one of the lowest results that has ever been recorded for the Bloc in recent memory. The last time I saw them that low was when Strategic Counsel (no longer in operation) put the Green Party at around 26% in the province. I think it is reasonable to assume the small sample size is a factor here, but what EKOS is recording is something the other polling firms have found: the Bloc Québécois is looking soft.

Prior to the campaign the Bloc was doing very well in Quebec, polling between 38% and 43% in virtually every poll. But since the campaign has started we're seeing more 34%-36% results. It still gives them a hearty lead but it appears to be the case that the Bloc is trending downwards. I don't believe the Bloc is actually down to 28%, nor do I believe that is even possible in the short term. But I do believe that the trend EKOS is identifying is a real one.

The beneficiary of their drop appears to be the New Democrats. They are doing well in all of these polls, posting second-place finishes in two of them. Angus-Reid has them four points up since March 24 and EKOS has them up three points since March 31. Nanos has seen steady increases for the NDP for five consecutive days in Quebec. It's undeniable that the NDP is making real inroads in the province. Whether the party can convert that support to seats, however, is another matter entirely.

But nationally, the parties are stable. Neither EKOS, Nanos, or Angus-Reid show any statistically significant changes at the national level since their last polls, and Environics hasn't weighed in on the federal question for some time. And to get back to this post's title, even the shifts in the three largest provinces are still relatively small. But some minor trends can be observed.