Today's projection primarily incorporates two polls released over the last few days: Ipsos Reid from the weekend and Nanos Research from today. The last fully independent three-day Nanos poll has also been returned to the projection, along with the regional data from Forum Research that was provided to me.

In the end, though, things are still static and there are no seat changes in today's projection update.

There have been some more interesting shifts at the regional level, however.

In British Columbia, both the Conservatives and Liberals are gaining, displacing the NDP and the Greens.

In Ontario, the Liberals have remained stable at 34.6% but the Conservatives are up 0.3 points to 42.4%. The Liberals were getting close in a few ridings but this gives the Tories a little more breathing room. The NDP, however, are still dropping and are now projected to be at 15.7% support.

In Quebec, the Bloc is down 0.4 points to 37.1%, while the Liberals, Conservatives, and NDP all make small gains. If this continues, more than a few Bloc seats will switch over to the Liberals. Ahuntsic and Brossard - La Prairie are the ones most on the bubble.

And in Atlantic Canada the Liberals are in the lead with a big 0.8 point gain. A few ridings like West Nova and Saint John are looking promising for the Liberals.

At this point of the campaign, it appears that the head-to-head match-up between Stephen Harper and Michael Ignatieff is pushing Jack Layton aside, while in Quebec the Bloc is looking less dominant. It could be an interesting three weeks. 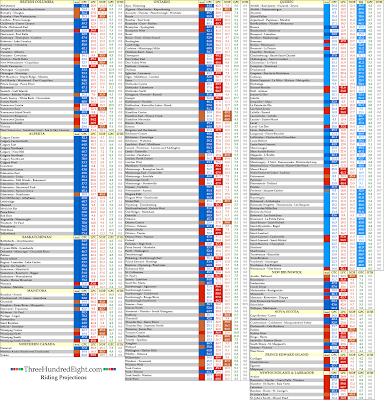