Wild swings in projection as Liberals roar ahead

My grandfather once gave me three words to live by: patience, tolérance, détente. The first two mean the same thing in French and English, while the last means to relax, to take it easy. In other words, not to sweat the little things. And with Nanos Research the only polling firm reporting six days after the campaign has started, I think I need to take his advice to heart. But from what I can tell, at this time last year Harris-Decima, Ipsos Reid, Angus-Reid, and EKOS had all started reporting regularly, in addition to Nanos. What's the hold up?

The Conservatives are unchanged at 38.6%, but have picked up one seat in Quebec and are now projected to win 151 seats. The Liberals, meanwhile, are down 0.1 points to 27.2% but are still projected to win 73.

Regionally, there have been very few changes. Both the Tories and Liberals are down 0.2 points in British Columbia to the benefit of the Greens.

Quebec has had a tiny wobble, with the Liberals and Conservatives both picking up 0.1 points.

And in Atlantic Canada, the Conservatives are down 0.5 points to 37.2%. The New Democrats take advantage, gaining 0.4 points.

The only seat change was Beauport - Limoilou, which has switched back over to Conservative MP Sylvie Boucher. But as you can see in the riding projection, I have the Tories tied with the Bloc in the riding. Boucher gets the nod because she is the incumbent.

I'll have a full report on the Nanos poll later today. Word is that EKOS will be reporting today, so we will have another set of numbers soon. 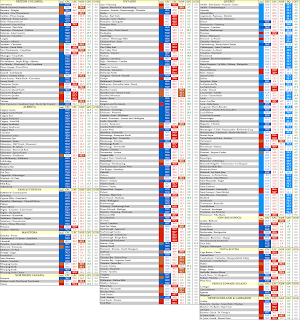 And if you're still puzzling over today's post title, it was written by a fish.
Posted by Éric at 8:30:00 AM