A bit of an odd day for polls. This morning I added an older Innovative Research poll to the model, today's Nanos, the eye-popping CROP, a partial EKOS, and five riding polls. In the end it caused little change.

Before we get into it, a word about the EKOS poll. It was a bit of a partial report, comprising two days of their full poll which was released today. Those results will be added tomorrow, replacing the national and Quebec numbers added to the projection this morning. At first I was quite confused, and understandably so. iPolitics listed the poll as being conducted from April 18-21, which was quite impossible as it was put up on their site at 12:03 AM on April 21. The EKOS graphic accompanying the article listed the dates as April 18-20, but even that was apparently inaccurate. Because of all this (which, after some inquiries, appears to be nothing but a series of typos and misunderstandings), I haven't included the EKOS poll in the graphic below. As it will be replaced tomorrow by the more recent report, I'll discuss it then. 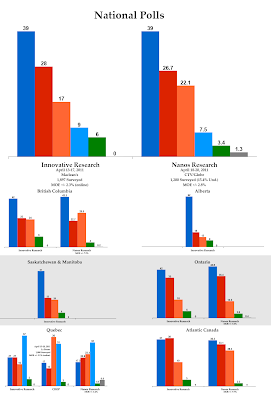 First off, note that Innovative and Nanos conducted their polls on completely different days. So we shouldn't be comparing them. And secondly, Innovative and CROP are both online pollsters.

We'll start with the older Innovative poll, which has remarkably no change since the last IRG poll taken between April 8-11. All of the national numbers are the same, except the Greens lost one point. The same in Ontario, while in Quebec the Tories have picked up one and the Bloc has dropped one. So, Innovative sees no movement whatsoever.

Now Nanos's poll is a bit more interesting. If we compare it to their last three day poll (April 15-17), we see the Conservatives holding steady (-0.8). The Liberals, however, are down 3.1 points nationally while the NDP is up 4.7 points - in three days. That is a statistically significant shift in support for the NDP.

But it isn't happening in Ontario, where variations were all within 0.4 points. It is taking place in British Columbia, the Prairies, and Atlantic Canada. In Quebec, the NDP is up only 0.4 points and the Liberals 2.5, with the Bloc dropping 3.8 points.

And that poses a bit of a conundrum for the CROP poll. Both Innovative and Nanos were in the field on the same days as CROP, yet they averaged 35% for the Bloc and 20% for the NDP, instead of the 36% for the NDP and the 31% for the Bloc that CROP found. So there is some disagreement of where the NDP stands in Quebec.

On CROP's side of the ledger are two new polls from EKOS and Forum, both showing the NDP and Bloc at similar levels of support as in the CROP poll. So, in the end these three polls might be capturing something real that Nanos and Innovative have not.

But this isn't the first time CROP has come out with an eye-catching poll at odds with others. In mid-March, CROP pegged the Liberals at only 11% in the province. No one else put the party that low.

So, we will have to wait and see what other pollsters find, but three polls released on the same day putting the NDP in front is nothing to scoff at. This could be the new reality.

Now to the riding polls, conducted by Segma Recherche for Le Droit and La Tribune and by Telelink for NTV News. Some pieces of information were missing in the media reports for these polls, and in the Telelink polls I portioned out the undecideds. 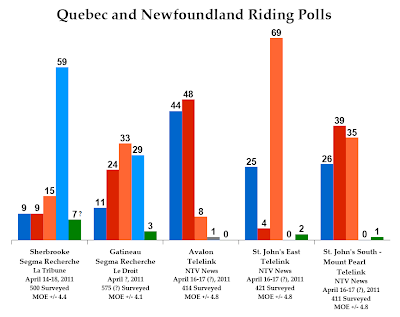 We'll start in Sherbrooke, where the only remarkable thing is that Serge Cardin is as far ahead as he is. This was not a riding likely to switch over, and it appears it will stay that way.

In Gatineau, however, Segma has reversed a previous finding that put the NDP well behind the pack. Now Françoise Boivin leads the Bloc's Richard Nadeau 33% to 29%, a lead that ballooned over the last few days in response to reports from Le Devoir over why she left the Liberal Party a few years ago.

This shows that the NDP can win some seats, that province-wide support can be translated into individual victories. But the race is still very close, and technically with the margin of error it is still a three-way race.

The projection was very close to what Segma reported in Gatineau (32% NDP, 28% BQ, 21% LPC, 16% CPC), while in Sherbrooke I didn't have the Bloc that high, with quite a bit of reason. The polls have been added to the model, with this newer Segma replacing the one on the eve of the campaign.

Over in Newfoundland & Labrador, Jack Harris is quite safe in St. John's East with 69% support. The Conservatives are well behind. Some people felt that the NDP would have more of a race on their hands here, but this does not seem to be the case. Comparing it to the projection prior to the inclusion of this poll, I was quite close: within five points for both the NDP and Conservatives. I overestimated Liberal support by eight points, however.

St. John's South - Mount Pearl has been touted as a three-way race, and this poll confirms that it certainly is. The NDP are doing quite well here, but the Liberals still hold the advantage - though with the MOE it could go either way. Here again the projection was performing well, with the Liberal and Conservative numbers pegged within four points of the poll. The NDP was underestimated by seven points, however, though I did have it as a Liberal seat.

Finally, Avalon. This riding has caught some attention in my projection, as I was projecting a Conservative landslide. This is because of the way the model works. In Newfoundland, Tory support has shot up and as that growth is applied proportionately, an already strong performance by the Conservatives in 2008 was buoyed greatly, perhaps more than it should've been. But I was within four points for the Conservatives in the other two ridings, so it appears Avalon is an exception.

In any case, Telelink has the race very close: 48% for the Liberals and 44% for the Conservatives. This indicates that the Liberals are still a strong party in Newfoundland, but that the Conservative rebound in the province is real. The last 10 days of the campaign could send these numbers in any direction. And with things as close as they are to a majority, these two Newfoundland seats could be extremely important on election night.
Posted by Éric at 2:46:00 PM