The only national poll to report on this morning is from Nanos, and it shows very little real change. But far more interesting are two riding polls conducted by Léger Marketing for RNC Media in northern Quebec. While the polls show the Bloc Québécois is still on track to win its two northern and northwestern Quebec ridings, they also give us an indication of how the NDP is eating into the other parties' support in la Belle Province. 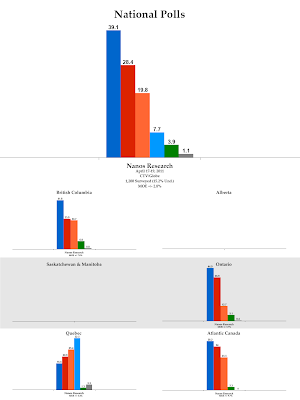 But before getting to the riding polls, let's take a look at this Nanos poll. If we compare it to Nanos's last complete three day poll (April 14-16), we see virtually no change at all. The Conservatives and Liberals are each 0.1 point higher today, a remarkable lack of change. The NDP is up 1.4 points to 19.8%, but even that is not statistically significant.

Quebec is interesting, however. Since that last three-day poll the Bloc has dropped 6.2 points and now leads with only 32.5% in the province. The NDP is up 5.9 points to 25.4%, while the Liberals are up 3.2 points to 20.9%. The Conservatives, for their part, are down 2.1 points to 16.6%. Even so, none of these changes are statistically significant, though they are part of a trend.

Note also that the race continues to be wider in Ontario than it was only a week ago, with the gap standing at eight points. The NDP have dropped 4.4 points since the April 14-16 poll in Ontario.

Unfortunately, there doesn't seem to be any link I can provide to the Léger poll conducted for Radio Nord. I have the details myself, so you'll have to take my word on them. UPDATE: Thanks to commenter Tony K, here is a link.

They were taken on April 14-17 in the ridings of Abitibi - Baie-James - Nunavik - Eeyou and Abitibi-Témiscamingue, two northern Quebec ridings held by the Bloc Québécois. Léger surveyed 400 eligible voters in each riding by telephone, meaning the results have a margin of error +/- 4.9%, 19 times out of 20.

One thing worth noting is that Léger did not list the names of the candidates. Instead, they listed the party names and the leaders: "Si des élections fédérales avaient lieu aujourd'hui, pour lequel des partis politiques suivants auriez-vous l'intention de voter, serait-ce pour le Bloc québécois de Gilles Duceppe, etc." Normally, riding polls include the name of the candidates. 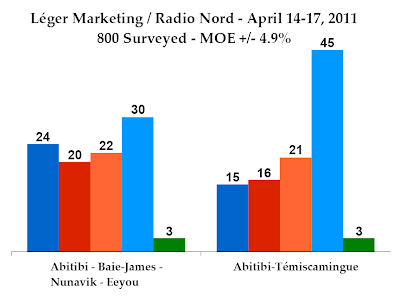 Abitibi-Témiscamingue is not really a riding on anyone's radar. The Bloc won it handily in 2008, and this poll indicates that Marc Lemay will do the same on May 2.

What is interesting, however, is that the NDP is up 11 points in the riding since 2008. Oddly enough, that is roughly the amount the NDP is up in Quebec as a whole. Will they have a generally uniform increase in support?

All other parties have suffered in this riding at the hands of the NDP. The Liberals are down six, the Conservatives are down four, and the Bloc is down three. This indicates that, in this riding at least, the NDP is stealing from everyone. Perhaps Abitibi-Témiscamingue is exceptional, but as a francophone riding it may be an indication of how the votes will move in ridings outside of Montreal.

Marc Lemay is helped by the fact that roughly 75% of people in his riding have no idea who the other candidates are. Léger asked whether they had good or bad opinions on each of the candidates, naming them individually. Lemay scored 60% positive, while the others mostly came up blank in voters' minds. That is a very good sign that the Bloc will win Abitibi-Témiscamingue.

Now, Abitibi - Baie-James - Nunavik - Eeyou is a far more interesting race. There were the unfortunate comments made by the Bloc incumbent Yvon Lévesque early on, the Conservatives have been targeting the riding, and the NDP has a "star" candidate in Roméo Saganash. This appears to have mixed things up.

Abitibi - Baie-James - Nunavik - Eeyou is a real four-way race in this poll, with all parties being within 10 points of each other. When you consider the margin of error, anything could happen on election night.

Compared to the 2008 election, the Bloc has dropped 10 points in the riding, while the Conservatives are down six. The Liberals are up two while the NDP is up a huge 14 points. Clearly in Abitibi - Baie-James - Nunavik - Eeyou the NDP is primarily taking support away from the Bloc, but they also appear to be drawing support from the Conservatives.

However, being northern the riding does not have a similar profile to the rest of Quebec, and since Saganash is a candidate that garners a lot of attention and has a base of support in the riding, it is tricky to use Abitibi - Baie-James - Nunavik - Eeyou as a model for how the vote might break in the rest of the province.

Nevertheless, it does show that the NDP is making real gains in ridings that they shouldn't (Abitibi-Témiscamingue) and ridings that they're targeting (Abitibi - Baie-James - Nunavik - Eeyou).

Things are tricky for Lévesque, as only 30% of respondents had a good opinion of him. Unlike in the other riding, respondents knew their other candidates a bit better: but still about 50% had no idea who they were. Contrary to what you might think, Saganash was not particularly better known than the Conservative and Liberal candidates, nor did he have a significantly better favourable opinion rate, so his drawing power could be limited.

In any case, Abitibi - Baie-James - Nunavik - Eeyou will be a riding to watch on May 2.

And in terms of how the poll compared to my projection, it was pretty close. In Abitibi-Témiscaminge the Bloc's vote was within 1.2 points of the poll result, while it was within 3.1 points for the Tories and the Liberals. It was off by 6.2 points for the NDP.

In Abitibi - Baie-James - Nunavik - Eeyou, the Bloc's support was pegged 7.4 points higher than it was in this poll, while the NDP's was 7.8 points lower. The Tory and Liberal projection was roughly four points off. With a 4.9% MOE in this poll, those are acceptable discrepancies.

These two riding polls have been added to the projection, and so will be reflected in tomorrow's update.
Posted by Éric at 3:05:00 PM