Neck-and-neck in Ontario in new polls

For many, the real election campaign begins tonight with the leaders' debate. I hope that will be the case, because the campaign hasn't been all that lively up to this point. Considering that, one is led to believe that the debate will have to have some exciting moments. Michael Ignatieff likely can't win this election without a good performance tonight, so he has to do something to grab Canadians' attention.

The two newest polls from Harris-Decima and Nanos Research confirm that. The Conservative lead is between nine and 12 points in these polls, and translated into seats these results would likely hand Stephen Harper another strong minority government. But the race is getting close in Ontario. 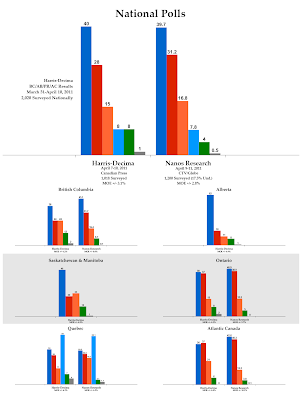 Harris-Decima releases their information in two different datasets: one over the last week and the other over the last two weeks. They only provide the most recent results at the national level, in Ontario, and in Quebec. Those were taken between April 7 and 10, very similar to the Nanos poll taken between April 9 and 11. It is likely no coincidence, then, that Harris-Decima and Nanos both came to similar conclusions for these dates.

This close race did not exist at the beginning of the campaign. If we reach back to my post on March 28, the first Monday of the campaign, you can see that the gap between the two parties in Ontario stood at between six and 15 points. Today, the gap is one or two. A few more polls like this, and the projection will begin to hand seats back to the Liberals in droves.

But we should not forget that Forum Research and Ipsos Reid found large Conservative leads in Ontario. So whether the race has truly closed is up for some debate.

Of note in Ontario is that the NDP has gained for three consecutive days in Nanos's daily tracking poll. Of course, that might be the result of having a particularly bad day or two for the NDP sometime late last week when Nanos put the NDP at only 8%.

These two polls also come to relatively similar conclusions in Quebec, where the Bloc Québécois is weakening (HD has them down eight points!). They both put the Conservatives in second and the Liberals in third, far from their doldrums earlier in the campaign. They disagree on where the NDP stands, but I get the impression that the support level of the NDP in Quebec will be the biggest point of contention between all pollsters for the rest of the campaign. Where the NDP's numbers go after Wednesday's French-language debate will be interesting to watch.

I decided to plug Harris-Decima's poll numbers into my projection model to see whether the Conservatives really are in majority territory at 40%. My gut told me no, as the race was too close in Ontario, and the model says the same thing. 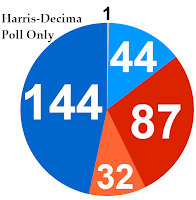 Based solely on the results of this Harris-Decima poll, ThreeHundredEight.com projects 144 seats for the Conservatives, 87 for the Liberals, 44 for the Bloc Québécois, 32 for the New Democrats, and one independent (André Arthur).

The Conservatives would do well in the West, as they always do, and take 12 seats in Quebec and another 12 in Atlantic Canada. But they can't win a majority with only 48 seats in Ontario.

The Liberals would win 44 there, along with 17 in Quebec, 16 in Atlantic Canada, and nine in the West. The bulk of the NDP's seats would come in Ontario (14) and British Columbia (7).

If the real campaign starts today, the Liberals have a lot of work cut out for them. They certainly haven't tanked but they haven't gained much, either. Two weeks are down and little has changed. Three weeks remain before the vote is held, and the Conservatives still look poised to win handily. Will tonight change any of that?

I'll be on Twitter (@308dotcom) during the debate, sharing my reaction to the two-hour slugfest. Hope to see you there!

The questions asked by each of the pollsters are as follows: "For those parties you would consider voting federally, could you please rank your top two current local preferences?" (Nanos). Question asked by Harris-Decima not available.
Posted by Éric at 1:52:00 PM