Four national polls are surprisingly consistent on the situation in Quebec while disagreeing with one another greatly on what is happening in Ontario. But what seems to be clear in these polls from Innovative, EKOS, Nanos, and Angus-Reid is that the rest of Canada is starting to jump on the NDP's Quebec bandwagon. 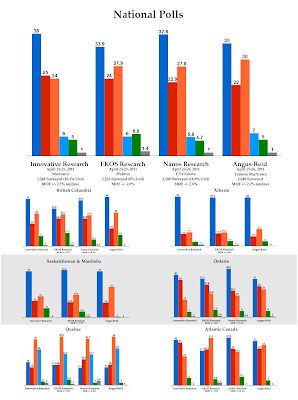 Whether that bandwagon leads us to a Conservative majority or minority government, however, appears to be within the margin of error.

With the Conservatives around 38% and the Liberals and New Democrats spliting the vote relatively evenly between them, as Innovative and Nanos show, we can expect the Tories to pull a majority government out of the mess. But if the Conservatives are instead at 34-35% with the NDP nipping at their heels, as EKOS and Angus-Reid indicate, then we can expect a re-run of the 2006 election with the New Democrats taking the place of Paul Martin's Liberals.

What is fascinating about these two scenarios is that they have extremely diverging consequences but are both drawn from polls that are not inconsistent, considering their margins of error. We're in such unknown territory that the election result is still very much in the air.

But what's happening to the Conservatives? Even in Nanos's polling the Tories have dropped. Ipsos-Reid might come along this week pegging the Conservatives at 40% or more, but every recent poll points to a drop for the Conservatives. Whether this is being caused by centrist Tories moving over to the Liberals to stop the orange tide or populist Conservatives jumping in with the New Democrats is impossible to say. But the Conservatives are starting to see a strong mandate slip away. They may still win a majority, but it could conceivably come with a smaller share of the vote than in 2008.

Across the polls, not all taken on the same dates but all overlapping, we can see some consistencies. In British Columbia, the New Democrats are clearly back in second and above their 2008 performance. They're currently around 28-30%, whereas they have also grabbed the runner-up position in Alberta as well.

In Quebec, all of the polls are remarkably similar on the NDP's score. These four polls put the party between 36% and 38%, an incredibly consistent result considering the margin of error in Quebec can be as high as six points. The Bloc's support level varies more (24% to 29%), as do that of the Liberals (14% to 20%) and the Conservatives (14% to 18%). They do seem to be indicating that the Tories are stumbling in the province.

But Ontario and Atlantic Canada appear to be toss-ups. That shouldn't be too much of a surprise in Atlantic Canada as the sample sizes are small, but even that region is starting to look erratic by its standards.

Ontario is all over the map. The Conservatives might have a huge lead, the Liberals might be hanging tough, or the NDP might be on track to historic levels of support. We may have to wait a few more days for Ontario to straighten up, or this might be a hint of some new volatility in the province.

A few riding polls from yesterday also caught my attention. There was a poll done by Oracle for the Green Party in the riding of Saanich - Gulf Islands. Polls conducted for parties, and especially those made public by parties, should be treated with suspicion. I do still add them to the model, though at a reduced 10% weighting, compared to 25% for media-funded riding polls.

This particular poll puts Elizabeth May ahead of Gary Lunn at 45% to 38%, with the Liberals and New Democrats out of the race at 9% apiece. The poll was taken on April 18-19 and surveyed 389 people. It has a margin of error of 4.9%, 19 times out of 20. It means the two main parties are statistically tied.

Of course, political parties don't release their privately funded polls without reason. For all we know, the Greens have been polling constantly and this is the first poll to put them in front.

The other riding poll that was brought to my attention was apparently conducted by Léger Marketing in the riding of Lac-Saint-Louis for the Conservative Party. The only information we have is via Ian MacDonald, a columnist. It was taken "after the debates" and included 500 people. Presumeably provided to Mr. MacDonald by Larry Smith's campaign, it puts the Liberals ahead 36% to 30% in the riding, a much closer race than an earlier poll showed. It pegs the NDP at 17%, but the level of support that the Bloc and Green candidates have in the riding is unknown. For that reason it wasn't added to the projection model. Polls need more than a vague mention in a column, particularly when they are paid for and provided by a political party.

Nevertheless, if true these two polls indicate that Saanich - Gulf Islands and Lac-Saint-Louis could be close ridings on Monday night. They were already ones to watch, but now we have more reason to watch closely.

Tomorrow, it looks like we'll have polls from Nanos Research, EKOS Research, Forum Research, and Segma Recherche to add to the model. Hopefully more will pop up. From what I'm being told we can expect a lot of polls over the last four days of the campaign.
Posted by Éric at 3:50:00 PM