NDP in the race for second

It's been the busiest Monday so far in the campaign for polls, and the buzz is all around the huge NDP numbers being put up nationally and in Quebec. So, after going over the polls that were added to the projection this morning from EKOS Research, Forum Research, Angus-Reid, Léger Marketing, and Nanos Research, I'll take a look at the New Democrats in Quebec and what kind of gains they might be able to make - and why it is so difficult to figure out where they'll be. 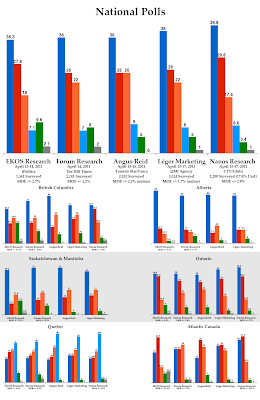 Note that this graphic only includes today's Nanos poll, and not the ones that were released on Saturday and Sunday. Since today's poll incorporates much of that data, it would seem wise to only put up the most recent numbers.

What is interesting from these five polls is that there is a fair degree of consistency, especially when you consider the margins of error and different methodologies: Forum and EKOS use an IVR system, Angus and Léger have online panels, and Nanos is a traditional telephone pollster. Yet all of them show a healthy Conservative lead (from between 7.5 and 12 points), though no longer one that would produce a majority.

The Liberal results are also relatively consistent, ranging between 25% and 30%. The party hardest to pin down is the NDP, though all pollsters put the party at a good level of support. But whether they are on track for a repeat of their strong 2008 performance (EKOS, Nanos) or on track for a historic election (Forum, Angus, Léger) appears to be within the margin of error.

There does need to be some delaying on Jack Layton's plans to make Stornoway energy efficient, like he has done with his own home in Toronto. Two of the pollsters (Forum and Angus-Reid) which have the New Democrats over 20% also had the New Democrats over 20% when they last reported, so the growth is not necessarily statistically significant. Even Léger was pegging the NDP higher than other parties when they last reported. We see in Nanos that the NDP has dropped over the last few days, so there does not appear to be a consensus opinion that the New Democrats are seriously about to replace the Liberals as Canada's second party. We need more data, though two new polls from Abacus and Environics today are showing the NDP at over 20% as well.

When we get down into the regional reports, a few things jump out. The New Democrats are doing well across the board in British Columbia, Alberta, and the Prairies. Strong performances in BC are especially noteworthy. They are also in second in Quebec in every poll, and are starting to show some life again in Atlantic Canada.

The race in Ontario no longer seems to be as close as it was about a week ago, as the NDP has returned to traditional levels of support at the expense of the Liberals. Indeed, the Liberals have dropped for four days straight in Ontario in Nanos's daily tracking.

And a quick note about an Oshawa riding poll that was forwarded to me by the Liberal Party in the riding. Of course, as it was commissioned by the party itself it needs to be taken with a big grain of salt, but after removing the undecideds we get 51% for Colin Carrie, the Conservative MP, 23% for James Morton, the Liberal candidate, and 20% for Chris Buckley of the NDP. These are not very different from 2008's result, except that the NDP is down about 10 points in the riding and the Conservatives are up about six. As mentioned, read with caution. It was taken on April 16 and surveyed 630 people by telephone.

Mustachioed Kiss - The NDP in Quebec

At the request of the CBC's Kady O'Malley - and how could I dare say no - I've taken a look at the NDP's electoral chances in Quebec.

Clearly, the polls are showing that the New Democrats are on the upswing. The three polls released this morning put the party between 23% and 26% in the province, roughly twice the level of support the NDP had in 2008.

This should not come as a surprise. Jack Layton was already very well liked in the province and, after two good French-language performances on Tout le monde en parle and in the debate, Quebecers are finally ready to turn that sympathy into votes for the party. The NDP has changed its tactics in Quebec, giving the province more wiggle-room in what has traditionally been a centralizing platform. And as the NDP shares much of the social democratic values of the Bloc Québécois, the party is a natural fit for many Quebecers.

But which Quebecers? And where?

This is a difficult question to answer. The NDP has been polling well in Quebec for months, with Quebec-based pollsters like Léger Marketing and CROP putting the NDP at around 20% well before the campaign began. But their regional breakdowns always spread the party's support equally among francophones and anglophones, in and around Montreal, Quebec City, and the rest of Quebec.

So where does this surge come from? If the party manages to capture 24% of the vote in Quebec, but spreads it equally among all regions, they have a good chance of only winning a handful of seats. Pinpointing where those seats would come is very difficult, particularly because the NDP has gone from a distant fourth to a strong second.

We saw this before in 2006. Then, the Conservatives went from 9% to 24% support in the province. During the campaign no one thought the Tories could win more than half-a-dozen seats, but then they went and won 10. However, in retrospect this should not have come as much of a surprise. The party's support was concentrated in Quebec City, meaning they could win those 10 seats while barely getting into the double-digits in the rest of the province.

The pockets of NDP support are not so clearly defined, and in fact may be limited to individual ridings. This makes it very difficult to project their potential seat wins, as the projection model becomes far less accurate the deeper down you go.

What can be said, however, is that with their relatively homogenous support in the province we can expect the NDP to win a few seats here and there, put up good numbers in a few others, and play the spoiler. The NDP's uptick in support in the projection, from 12% to 18%, nicely corresponds with most of the combined five-point drop of the Liberals and Bloc. As the NDP has been polling well among both francophones and anglophones, we can safely assume that the NDP will be generally taking social democratic, soft-nationalist francophone votes from the Bloc outside of Montreal and anglophone, federalist votes from the Liberals on the island (with a bit of cross-pollination, of course).

How would this translate into seats? In order to answer Kady's request, I ran the three polls from Nanos, Léger, and Angus-Reid individually through the model. The result was somewhat surprising, which you can see in the chart below. The bracketed numbers gives the NDP the seats in which they were within 5% of the winner. It can act as a bit of a ceiling. 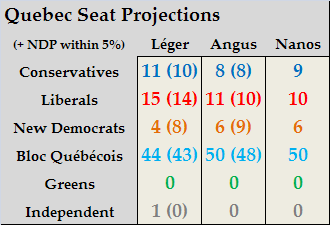 In the Léger poll, the NDP would win Gatineau, Jeanne-Le Ber, Outremont, and Westmount - Ville-Marie, or two seats from the Bloc and one from the Liberals. The NDP has a good candidate in Jeanne-Le Ber in the form of Tyrone Benskin, while the Westmount - Ville-Marie result might be a bit of an outlier. The NDP does well in the projection in this riding because of the strong performance of journalist Anne Lagacé-Dowson in 2008.

Léger, then, puts the NDP range at between 4 and 8 seats, with the Bloc suffering most. In fact, the Conservatives and Liberals take advantage of this weakness in a few ridings.

Angus-Reid is a completely different situation, as the Tories and Liberals make more room for the NDP. The Bloc flies above the three federalist parties and manages to pick-up seats, despite being at 36%.

The NDP would win Gatineau, Hull-Aylmer, Pontiac, Jeanne-Le Ber, Westmount - Ville-Marie, and Outremont in this scenario. This gives them two pockets of support: three adjacent ridings in the Outaouais and three more in downtown Montreal.

The NDP would also be able to benefit from vote splitting in Drummond and Saint-Lambert, two ridings in which the party would be within five points of the Bloc winner. They would also be within range of Laval - Les Îles, where the Liberals have no incumbent.

Angus-Reid pegs the NDP range at between 6 and 9 seats in the projection. In other words, it appears the NDP has more to gain if they can win seats off the backs of the Liberals and Conservatives than at the expense of the Bloc.

Finally, Nanos has a bit of a middling scenario, with the NDP winning the same six seats as with Angus-Reid but not being within five points of the winner in any other riding.

One riding that has often been mentioned as a potential NDP pick-up but did not come up in this analysis is that of Abitibi - Baie-James - Nunavik - Eeyou. There are several reasons for this.

The NDP only had 8% support in the riding in 2008. For the NDP to win they really need to benefit from a complete transformation of the vote in this riding, something which my projection model is unable to replicate. This does not mean it won't happen.

But I'm personally not convinced that it is likely. Roméo Saganash is a fabulous candidate for the NDP and is well-known in the area for his work with the region's aboriginal population, of which he is a member. But First Nations have not traditionally voted in great numbers, which poses a challenge for Saganash. If he increases the turnout in this riding and takes some votes from the Bloc and (to a lesser extent) the Liberals, then he has a very good chance of pulling off an upset. But it would be a big upset. Nevertheless, Abitibi - Baie-James - Nunavik - Eeyou can act as a sort of counterweight to the unlikely scenarios that elect an NDP candidate in ridings like Pontiac or Westmount - Ville-Marie.

In addition to Newfoundland & Labrador, where the ABC campaign of 2008 muddies the water, Quebec could turn out to be the most difficult province to accurately project on May 2. The results in the province were supposed to be a foregone conclusion when the campaign began, but with two weeks left it looks like Quebec may have a few surprises in store on election night.
Posted by Éric at 3:48:00 PM