The polls are not a-changin in new Nanos

The day has gotten a little away from me, but nevertheless here is the belated poll summary for yesterday's single poll, taken in the context of Conservative promises on the Lower Churchill, Liberal promises on child care, and New Democratic promises on the end of subsidies for the oil sands. Over to you, Nanos Research! 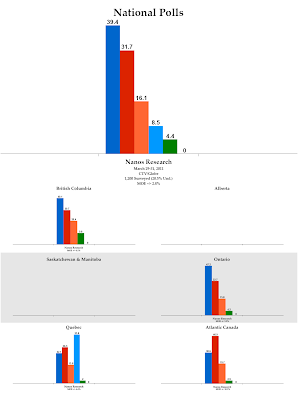 Yes, there is a new EKOS poll out this afternoon, but it won't be added to the projection until Monday's update so I will leave coverage of it to then. In the meantime, I invite you to look at their release.

Not only do I invite you to do it, I encourage you to do it. This Nanos/Globe/CTV poll does not have much new in it. Normally, that would be fine. When we have a plethora of polls every day we will be able to tell whether things actually are stable or not, and one poll with a steady line might act as a bit of an anchor for wilder variations in others. But as Nanos is, at this point, the only polling firm conducting daily tracking the results are a little dull.

And the new EKOS poll shouldn't break the drudgery, as at this point they are planning weekly releases. I've heard from a few other pollsters that have said they are planning some things for the campaign, but so far no word of another polling firm that will be conducting daily tracking. At this point, all we can do is hope.

What this poll shows is another tiny uptick for the Conservatives, who are now at 39.4%. The Liberals are down one point to 31.7%, a relatively large drop in a rolling poll. The NDP is stuck at 16.1% (-0.2), indicating that Liberal and NDP fortunes aren't necessarily tied. But all of these movements are within the poll's sampling error.

British Columbia and Ontario had little movement worth noting, while the Conservatives dropped almost five points in Atlantic Canada. I think their support for the Lower Churchill project, however, will see them making gains in the next few days in the region. Whether the pledge to finalize a deal for the HST with Quebec will balance the situation for them in that province, however, remains to be seen.

The next projection update will be on Monday morning. If you need a fix this weekend, you can read Saturday's projection in Le Devoir (which will include the EKOS) and Sunday's on The Globe and Mail website and (to be confirmed) in the Monday edition of the newspaper. If any polls come out tomorrow morning, they will be included in the G&M update.

Note: Nanos Research asked respondents "For those parties you would consider voting federally, could you please rank your top two current local preferences?"
Posted by Éric at 4:33:00 PM