New polls from Environics and EKOS were added to the projection this morning, but already EKOS has updated their latest missive. That particular poll will be dealt with tomorrow. For now, we'll focus on yesterday's numbers.

We'll also take a look at four riding polls conducted in Quebec, three of them in the Saguenay region and one in the Centre-du-Québec/Eastern Townships. The ridings in the Kingdom of the Saguenay show some very interesting races between the Conservatives, the Bloc Québécois, and the New Democrats. 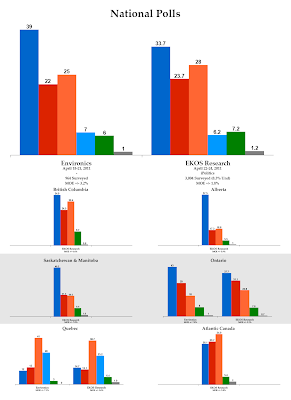 These two national polls were taken on different days, so their findings aren't exactly comparable. But at the national level it is worth noting that they both peg the New Democrats in second, ahead of the Liberals.

But for Environics this result isn't strikingly different than their poll from April 12-17. At that point, they had the spread as 39% for the Tories, 24% for the Liberals, and 22% for the NDP. Since then the NDP has gained three points and the Liberals have lost two, but neither of those variations are statistically significant.

The same does not go for EKOS, however. Since their April 18-20 poll, the NDP has grown by 3.3 points - just outside of the margin of error for comparing the NDP's support over two polls. The Liberals have dropped one point to 23.7% while the Conservatives are down 0.7 points to 33.7%.

The NDP's growth comes in both Ontario and Quebec, where the party is up 3.3 points and 7.3 points, respectively. In Quebec, the NDP has taken the lead forcefully, pushing the Bloc down two points to 25.2%. Note that the Conservatives are down to 14.7% while the Liberals are at a very low 13.1%.

And that has been a bit of an overlooked state of affairs in Quebec. The Conservatives are not doing very well. Are nationalist Quebecers moving back to the Bloc now that the NDP seems to be on the upswing?

Perhaps some riding polls from the province will shed some light on the situation. And, really, thank you Quebec for providing so many riding polls in this election. The rest of the country has really been lazy! 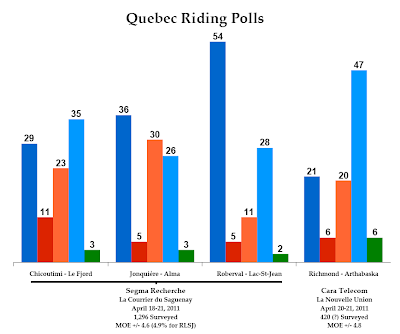 Let's start with the poll for Richmond - Arthabaska, a riding that straddles the Centre-du-Québec (Victoriaville) and part of the Eastern Townships. The poll was conducted by local firm Cara Telecom for La Nouvelle Union. The Bloc has a big lead here with 47%, virtually unchanged from 2008. The Conservative candidate, Jean-Philippe Bachand, is second with 21% but that represents a drop of eight points for the Tories since the last election. The NDP has gained 11 and stands at 20%, demonstrating how some of the NDP's new found support in the province will not translate into seats in every part of the province.

While Richmond - Arthabaska is a bit of a landslide, the two ridings in Saguenay are very close. Conducted for Le Courrier du Saguenay, and a smattering of other local papers, by Segma, the poll found that in Chicoutimi - Le Fjord and Jonquière - Alma, the two ridings that make up the city of Saguenay and outlying regions, there is a three-way race.

In Chicoutimi - Le Fjord, the incumbent Bloc candidate Robert Bouchard is leading with 35%, a drop of six points since the last election. He is followed closely by the Conservative Carol Néron at 29%, a drop of five for that party. Running in a surprising third is the New Democrat Dany Morin at 23%, a gain of 15 points.

It is much the same story in Jonquière - Alma, represented by Conservative cabinet minister Jean-Pierre Blackburn. He is still leading with 36%, but that is a drop of 17 points. The NDP's Claude Patry (a local labour leader) is running second at 30%, an astonishing 25-point gain for the party. The Bloc is in third at 26%, a drop of 12 points. The NDP spoke grandiosely at the beginning of the campaign about Patry's likelihood of being elected, but it now looks like it wasn't an unreasonable proposition.

Roberval - Lac-Saint-Jean, which was supposed to be a target seat for the Bloc, looks safely in the hands of Conservative incumbent Denis Lebel with 54%, a gain of 10 points since the last election. The Bloc is well behind at 28%, a drop of 12 points.

These three riding polls in the Saguenay-Lac-Saint-Jean region show just how far the NDP surge has reached. Where they have a decent candidate, they can come from absolutely nowhere to be competitive. And even when they don't have a particularly good candidate they can still push 20%. But while the NDP is performing excellently in Quebec, the Bloc is certainly not out of it, and Conservative incumbents still appear to be on the road to re-election.

Another thing to take from all four of these riding polls is the complete non-existence of the Liberals, though none of these ridings were particularly good for them in 2008.

Jonquière - Alma and Roberval - Lac-Saint-Jean compared less favourably. In the former, the difference ranged from eight to 20 points for the three main parties, while in the latter that range was within four points for the NDP, Liberals and Green but within 11 for the Tories and Bloc.
Posted by Éric at 3:13:00 PM