The three national polls added to the model this morning (EKOS, Nanos, Forum) are all telling the same story. And one of those things is that the Conservatives are struggling in Quebec. A few riding polls indicate that this weakness could even put some of their fortress seats at the mercy of the - yep - NDP. 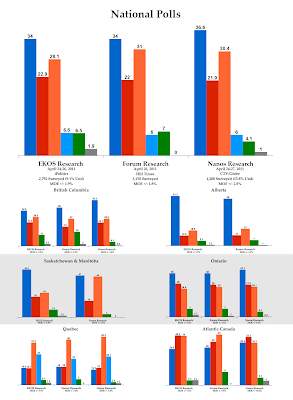 The topline numbers of these three polls are almost identical: the Conservatives around 35%, the NDP around 29%, and the Liberals around 22%. The New Democrats are strongly in second in the two westernmost provinces, and the situation in Ontario is looking dangerous for the Liberals. In Atlantic Canada we have a three-way race, while in Quebec the New Democrats are enjoying a 10-17 point lead over the Bloc Québécois.

But look at the Conservative numbers in Quebec: between 14% and 16%. That is well below their 2008 performance and means the loss of about a quarter of their support. Perhaps they are bleeding that support away to other parties in regions in which they are not a factor. Maybe - but two polls conducted for the Journal de Lévis just when the NDP were beginning to take off indicate that even in the Quebec City region the Tories are suffering.

Let me re-iterate that point. These polls were conducted between April 12-16. The NDP really began to take off starting on April 17. Nevertheless, in the polls conducted for Lévis - Bellechasse and Lotbinière - Chutes-de-la-Chaudière the NDP is polling at 23%.

In Lévis - Bellechasse that represents a growth of 12 points since the 2008 election, while in Lotbinière - Chutes-de-la-Chaudière that is a 10-point gain. Worse for the Tories is that Steven Blaney in the former and Jacques Gourde in the latter have seen their vote drop by eight (Blaney) and 12 (Gourde) points, and this before the Conservatives dropped to the mid-teens in the provincial polls.

In neither of these ridings, however, has the Bloc appeared to lose support. That may not be the case almost two weeks later, but it is remarkable that these two polls were showing New Democratic gains at the hands of the Conservatives before the party took off in the province, and not the Bloc. It is just speculation, but with the large margins of error in these Axiome polls and with the NDP gains in the province as a whole, for all we know the NDP could be leading in these two very Conservative ridings by now. 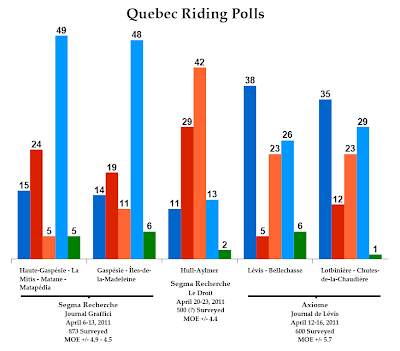 They are demonstrably leading in Hull-Aylmer, the riding just across the river from Parliament Hill in Gatineau. The riding has famously been Liberal for about a century, but the latest poll from Segma Recherche (conducted April 20-23, so recently) shows the New Democrats opening up a 13-point lead over Liberal incumbent Marcel Proulx.

At 29%, that is a drop of eight points for the Liberals. But at 42%, the NDP has gained 22 points since the 2008 election. The Bloc is down to only 13%, meaning the NDP has taken about the same amount of support from the Liberals as from the Bloc. The party really does cross the divide. The Conservatives are also down. But with this poll Hull-Aylmer looks like a very safe bet for the NDP, and adds fuel to the fire for a potential NDP victory in neighbouring Pontiac.

That brings us to two polls done in the Gaspésie by Segma Recherche for the Journal Graffici. Note that these polls are old, taken between April 6-13. At that time the NDP was roughly at 18% support in Quebec, so still well below their current levels but nevertheless doing respectably.

Nevertheless, the NDP was still at only 5% to 11% support in these two ridings. Even if we double this support, as the NDP has apparently done in the province as a whole since these polls were taken, we still have the NDP out of the race. This is an indication that the NDP will not be able to win just any riding in Quebec.

But what is more surprising is that in the case of Haute-Gaspésie - La Mitis - Matane - Matapédia the Liberals were only polling at 24%. They've sunk in the province since then, so they are unlikely to be doing better now. That's quite a drop from 36% in 2008. The Conservatives are still at about the same level they were in 2008 in this riding, but that has to be a disappointment as the Tories thought they had a good shot with a decent candidate.

Though the Bloc was only at about 36% or so in the provincial polls when this riding poll was taken, the Bloc had grown its support by about 11 points in the riding since the last election. This might not be a surprise, as the previous Bloc MP was a bit of a no-show. Jean-François Fortin, a local mayor, was leading the riding in this poll with 49%.

In Gaspésie - Îles-de-la-Madeleine, the Liberal and Conservative vote had dropped by quite a bit to the benefit of the Bloc's new candidate, Daniel Côté. At 48%, it is unlikely that the recent drop in support the Bloc has seen in the province has put this particular candidate in danger. The NDP was only at 11% in this riding when the poll was taken.

Taken all together, these five riding polls tell us something about what is going on in Quebec. Firstly, the Liberals are completely out of it, even in ridings where they were supposed to be competitive.

The Bloc is looking in rough shape and can lose a lot of its support in NDP-winnable ridings, but they do still have a base of support to fall back upon (the two Quebec City-area ridings and those in the Gaspésie demonstrate that). For the NDP, they have the potential to be competitive in surprise locations (Lévis, Lotbinière) and win in others (Hull-Aylmer), but still have a long way to go in other parts of the province. It is unlikely the Bloc will be reduced to single-digits in seats.

And for the Conservatives, even their fortresses are at risk. The seats held by Blaney and Gourde are among the safest for the Tories in Quebec, yet they look threatened by the NDP's surge. And the polls in Hull-Aylmer and the Gaspésie show that the Conservatives can disappear in ridings in which they never had more than an outside shot at winning.

What this means is that the New Democrats are in a terrific position to win a great number of seats in Quebec on Monday. All of the other parties are looking weak, even in their strongholds. Now the NDP just has to hope (because that's all they can do with the means they have in the province) that Quebecers go out and vote.
Posted by Éric at 3:43:00 PM