Small gains by Conservatives and NDP

With new polls from EKOS and Léger Marketing over the weekend, we now have some other polling firms to add to the model in addition to the daily numbers from Nanos Research. A full poll summary will follow later today.

The new projection involves quite a few seat changes since Friday, but in the end the net result is a gain of one seat by the Conservatives and one by the New Democrats, both at the expense of the Liberals. But in all, five seats have changed hands.

Regionally, only the NDP had a good weekend. They were steady in the Prairies and Ontario, and made decent-sized gains in Alberta, Quebec, and Atlantic Canada. With the possible exception of Quebec, however, those provinces are not growth regions for the NDP.

The Conservatives made a gain of one point in British Columbia, but also lost about a point in the Prairies. A drop of 0.4 points in Ontario is also problematic, considering the 0.5-point gain of the Liberals there.

But aside from that and a 0.7-point jump in the Prairies, this update has little good news for the Liberals. They dropped big in British Columbia and Atlantic Canada, and dipped below 20% in Quebec.

Four of the five seat changes took place in Ontario. Ajax - Pickering went from the Liberals to the Conservatives, and now Christopher Alexander is projected to be in the lead. It is the same story in Brampton West and Brampton - Springdale, where Kyle Seeback and Parm Gill are favoured.

This might seem odd considering that the Liberals closed the gap in Ontario by 0.9 points. I won't try to rationalize this change with some theory about voting behaviour. This is just how the model works. The incumbency effect is partly dependent on whether a party is gaining or losing in a province. In this update, the Liberals have gone from marginally losing support to marginally gaining support compared to 2008 in Ontario. That means the incumbency effect for MPs like Ruby Dhalla and Mark Holland has flipped, putting them at a disadvantage. The incumbency bonus is far greater when a party is losing support than when it is gaining, as my own analysis has shown.

One piece of silver lining for the Liberals, however, is that Ted Hsu is now the favourite in Kingston and the Islands, ahead of the Conservative challenger.

Elsewhere, the New Democrats are now projected to be ahead of the Tories in Elmwood - Transcona, NDP MP Jim Maloway's riding. The Conservatives had been projected to win the riding on Friday. 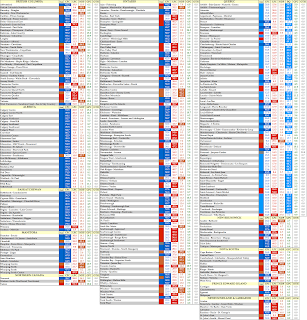