The latest set of polls from Abacus Data, Environics, Harris-Decima, EKOS Research, and Nanos Research (click on links to see full methodologies, questions asked, etc.) continue to show much of the same. The Conservatives hold an 8-15 point lead, the Liberals are still relatively stuck, and the New Democrats are on the upswing. It all points to a House of Commons similar to the one we had when the election called. 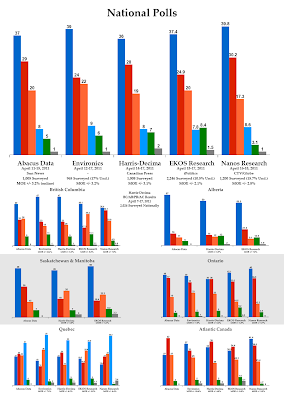 But there is a degree of consistency between these polls. The Conservatives are between 36% and 40%, generally unchanged since 2008. Liberal support looks a little more volatile. Abacus, Harris-Decima, and Nanos show them in a pretty good position, while Environics and EKOS show the Liberals in a very sorry state. And the NDP is at a very high level of support in every poll except the one by Nanos.

Ontario and Quebec have some interesting variations. Are the NDP doing very badly or very well in Ontario? And contrary to what you might think, the polls showing the closest Conservative-Liberal races are those where the NDP is doing well.

What most of the polls are also showing in Quebec is that the Conservatives are starting to look a little weak. In the polls that are indicating Tory troubles in Quebec, the Bloc is doing better. There appears to be a lot of transfers of support going on in Quebec between all four parties.

While on the subject of Quebec, a quick note about the three riding polls done by CROP for Le Soleil. They put the Bloc ahead in Louis-Hébert (37% to 28% for the Tories) and the Conservatives ahead in Beauport - Limoilou (35% to 32% for the Bloc). Most interestingly, they have André Arthur at 37%, followed by the Bloc at 32% in Portneuf - Jacques-Cartier.

Riding polls give me a chance to see how my model is doing, and before I entered all of the polls from this morning the projections were very close for two of these three ridings. In Beauport - Limoilou and Louis-Hébert, I was off by three points or less for all parties except the NDP in Beauport - Limoilou, and in that case I was off by 4.5 points. For the two main parties in Beauport - Limoilou, I wasn't off by more than 0.7 points. Portneuf - Jacques-Cartier had Arthur's support off by about six points, but was on the money for the Bloc. With the riding polls added to the projection, I should be able to zero-in on the final result more accurately in these three ridings.

Back to the national polls. In terms of poll-to-poll variation, there isn't much going on. Compared to their last full three-day poll, Nanos had the parties up or down less than two points, which is the same situation when comparing the Abacus and Environics polls to their last reports early in the campaign. Harris-Decima is showing much more of a swing, with the Tories down four and the NDP up four over the last week or so, but that isn't a statistically significant change in support. The same goes for EKOS, as all national variations are less than three points.

Voting intentions are starting to become a little unhinged, though. The polls are not greatly at odds with each other but some variations at the regional levels seem to be taking place, though they also appear to be cancelling each other out at the national level.

The NDP's performance in this election seems to be rattling a few cages and shaking things up. Where we'll be in one week's time, let alone 13 days, is anyone's guess. Of course, based on how the polls have moved over the last three years, the most likely scenario is that we'll be in the same position as we are today.
Posted by Éric at 4:17:00 PM