Two new national polls were added to the model this morning, along with three new riding polls conducted in Quebec. All of these polls are responsible for some shift in the projection, but there have also been a few changes made to my weighting system.

I realized that the poll-weighting tests I had run for the 2006 and 2008 elections were done slightly incorrectly. Rather than only include complete polls like I am doing in this election, my tests included each day of a daily tracking poll. What this did was fill the model with only newer polls, whereas the system I am using actually includes more older polls.

However, I don't tweak my model arbitrarily or because things "don't look right". I need numbers and evidence to back-up any changes to the model. So, I ran some new tests modeling the 2006 election (which has some similarities with the current election because of the sudden swing in support) and found that the best course of action would be to reduce each passing day's weight by 7% rather than 4%. This ages polls more quickly. I also decided to remove the "correction" that was added to the projection to take into account how the polls had been inaccurate in past elections. In the end, the tests ran better without this correction. The correction was very small, and for the most part the growth that the Green Party has been given today is due to that. The other parties were only marginally effected.

So, while some of the changes in this update are artificially influenced, most change can be attributed to the new polls. Let's get to it!

The Bloc Québécois is down 0.3 points nationally to 7.8% and one seat to 44. The Greens are up 0.6 points to 6.1% but remain seatless. André Arthur is the lone independent projected to be elected.

The combination of increased aging, new polls, and the removal of the small correction has led to some major changes at the regional level.

The Conservatives have dropped a point or so in each region, but they are especially hurt by the drop of 1.3 points in Quebec. They are down to 18.7% there.

The Liberals dropped less out west but a lot in Atlantic Canada. Their drops in Quebec and Ontario are especially problematic.

The New Democrats rose everywhere, most importantly in British Columbia, Atlantic Canada, and Quebec. There, they grew their support by 3.5 points in the projection. They are now at 24.2%, only 8.5 points behind the Bloc Québécois, which has dropped 1.4 points to only 32.7%.

In terms of seats, there have been quite a few changes.

In British Columbia, the NDP candidate Kennedy Stewart is now favoured in Burnaby - Douglas, the seat previously held by retired NDP MP Bill Siksay. The Conservatives had been projected to win it earlier.

In Ontario, the Liberals are projected to once again win Ajax - Pickering (Mark Holland) and Brampton - Springdale (Ruby Dhalla), while New Democratic incumbent Malcolm Allen is the projected winner once again in Welland. These are all pick-ups from the Conservatives.

But it is in Quebec where the most changes have occurred. The New Democrats have picked up four seats, one each from Bloc and Conservatives and two from the Liberals.

The NDP has picked-up two ridings in the Outaouais: Hull-Aylmer from the Liberals and Pontiac from the Conservatives. Nycole Turmel and Mathieu Ravignat are now the respective projected winners.

On the island of Montreal, the NDP has moved ahead in Jeanne-Le Ber (Tyrone Benskin) and Westmout - Ville-Marie (Joanne Corbeil).

Now, it may be surprising to see the NDP knocking off a star Liberal MP and a Conservative cabinet minister. With the NDP soaring into new territory in Quebec, it is very difficult to predict which ridings will be swept away in the orange tide.

But Lawrence Cannon has never exactly been a consensus choice in Pontiac, and the NDP is leading in Montreal, according to several polls. A minister that has never sought headlines and an astronaut opposition MP are not immune from sweeping change. Recall that even the Prime Minister was defeated in her riding in the 1993 election. And the six seats now projected to vote NDP in Quebec are divided into two blocks of three adjacent seats. It seems relatively sensible that support would spill over from one riding to the other. But there is no doubt that the NDP's rise in Quebec will make things difficult for seat projectors on May 2nd. 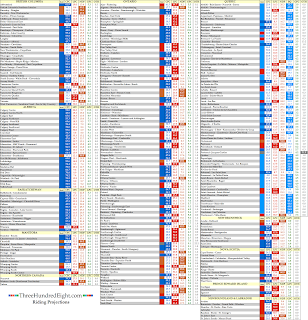