Liberals gain in Ontario and Quebec

With the two debates now completed, we're entering the final 19 frantic days of the campaign. Three of the polls added to the projection this morning, from COMPAS, Innovative Research, and EKOS, are all pre-debate polls, while only one-third of today's missive from Nanos was taken after the English language debate.

However, I think last night's French debate has a greater chance of having an influence on the campaign. I was expecting a big performance by Jack Layton, as the newfound support the party has in Quebec required some buttressing in the debate. While Layton performed well enough, I don't think he did anything to push his party into second place on election night in the province, and I think we might even see his numbers drop.

Stephen Harper was not very present and will likely not see any boost in Quebec, but both Gilles Duceppe and Michael Ignatieff had a good showing in the debate. Ignatieff performed better in French than he did in English, and was very strong when the debate turned to Quebec's place in Canada. My own perception is that he might have done enough to put himself head and shoulders over Layton and Harper as the federalist option.

Duceppe started off slowly but also woke up at this point of the debate. While he didn't have a home run performance, I think he shored up his own support and we may see his numbers return to the usual 38-40% that the party had enjoyed for the months running up to the campaign.

But in the meantime, the four polls in this projection update (in addition to Nanos's poll from April 8-10 which has been returned to the model) have caused things to swing.

The New Democrats are steady at 33 seats, and have picked up 0.1 point to reach 16.8% in the projection. The Bloc Québécois is down 0.3 points to 8.8% nationally and one seat to 49, while the Greens are unchanged at 6% support.

More damaging is the drop of 0.4 points to 40.9% in British Columbia, especially considering the gain of 0.4 points and 0.2 points by the New Democrats and Liberals.

The Liberals did not see their support shift very much out west, but it did shift out east. The Liberals have gained 0.4 points in Ontario and now trail the Conservatives 41.9% to 35.4%, a gap of 6.5 points. In Quebec, the party is up 0.4 points to 20.7%, while the Liberals have regained the lead in Atlantic Canada with a 0.3 point gain there.

The New Democrats had a good gain in BC and another in Quebec, but the drop in Ontario (though small) is unfortunate for them.

And the Bloc Québécois had a very bad movement, dropping 0.6 points to only 36.7% in Quebec.

The two seats changes have come in Ontario and Quebec. The Liberals have retaken Brampton - Springdale from the Conservatives, meaning incumbent Ruby Dhalla is the favourite once again. In Quebec, the Liberals have also retaken Brossard - La Prairie, held by Alexandra Mendes when the government fell. These are both Liberal seats that are returning to the party in the projection. The Liberals are two seats away from starting to make actual gains.

That will likely take place in Ontario, though a few seats in Atlantic Canada and Quebec are also on the bubble. The Liberals are within 1.1 points of the Conservatives in Ajax - Pickering, Kitchener - Waterloo, and Vaughan, the last riding looking all the more likely to return to the Liberal fold after yesterday's events there.

But several other ridings are also on the tipping point. The Liberals trail the New Democrats by 2.5 points or less in Trinity - Spadina and Sudbury, while they are within three points of the Conservatives in Mississauga - Erindale and Kitchener Centre.

Generally speaking, the projection is behind emerging trends. So while we can't know whether the Liberals will continue to grow their support in the polls, we have a good idea that they will grow in the projection as older polls are dropped off and the more recent reality (putting the Liberals neck-and-neck with the Tories) takes more place in the model. The great thing about the projection, though, is that if the recent Liberal "surge" in the province dissipates, the projection will almost immediately stop the Liberals from moving forward. It treats gains with a raised eyebrow until they can be proved by consistent results.

Note that the riding projections have now been updated to reflect all the independent and minor party candidates. Nominations have closed and Elections Canada has the final tallies of candidates, so the projection is now up to date on how the "Other" vote will likely turn.

Independents are given 0.7%. When more than one minor party or independent candidate is present in a riding, their results are combined. So, for example, in South Surrey - White Rock - Cloverdale the Other vote is currently 4%, divided between a Progressive Canadian candidate, a Christian Heritage candidate, and three independents. The Others in this riding are assigned 4.3% of the vote, but because of the space available in the riding projection their vote has been reduced to 4%. 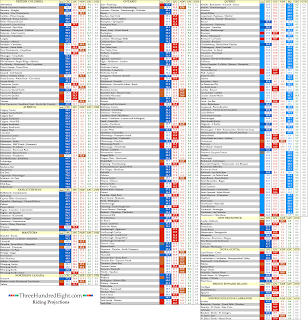