I was waiting on a new poll from EKOS to be reported on, as well as hoping to get my hands on the details of the newest (and oddest) COMPAS poll, but in the end I only have today's Nanos poll for CTV and The Globe and Mail to add to the projection. Accordingly, there is little change to report.

But I suspect this will not be the case for much longer. While last night's debate was interesting, I'm not sure it will move the numbers in any significant way. However, it can take time for this sort of thing to register, and often the effect of the debate is only known well after the leaders have finished arguing.

In terms of poll results, we shouldn't begin to see any of the effects until tomorrow at the earliest, and by the weekend we might still only be seeing a piece of the puzzle. The French debate tonight will, of course, have a large influence on the polls in Quebec but if anything especially remarkable happens it could resonate in English Canada as well.

My initial impression, however, is that all of the leaders generally shored up their own support but did little to capture votes from the other parties.

There are no changes in the seat projection today. The Conservatives are still at 152, the Liberals are at 73, the Bloc Québécois is at 50, and the New Democrats are at 33. The Tories are back up to 39% while the Liberals and NDP are unchanged at 28.1% and 16.7%, respectively.

There has been little change at the regional level as well. Today's Nanos poll replaced yesterday's in the model, so there were only tiny variations.

The most important are those that took place in Ontario and Quebec. The Conservatives are unchanged at 42% in Ontario, but the Liberals are now at 35%. It is a gain of only 0.1 points, but it nevertheless narrows the gap between them and the Tories. The seats I highlighted yesterday as liable to fall back into the Liberal fold are all the more likely to go Grit now.

In Quebec, the Liberals are down and the Bloc is up - the first time the Bloc has seen their numbers improve in the projection in a few days.

Tonight's debate is very important for Gilles Duceppe, as he has to galvanize what has been, so far, a relatively uninspired campaign. Expect him to go hard at all three of the federalist leaders, as he is being pressed by all of them: the Conservatives in Quebec City, the Liberals around Montreal, and the New Democrats everywhere.

The Bloc isn't likely to lose any seats at the hands of the NDP (except maybe Gatineau), but the real threat to the Bloc that the NDP poses is as a spoiler. Many ridings in Quebec were close BQ/Liberal or BQ/Conservative races, and if the NDP siphons off enough support from the Bloc it could benefit the two other parties.

Undoubtedly, the NDP is also taking some votes from the Liberals and perhaps even the Conservatives. But the Bloc and NDP are both social democratic parties, and many polls show francophones and Bloc supporters have a generally high regard for the NDP and their leader.

As Quebecers already have a pretty clear picture of how the Conservatives and Liberals see their province, expect Duceppe to go after Jack Layton on issues that revolve around Quebec. We saw that a little last night when he talked about Bill 101. The NDP is more of a centralizing party than their two federalist counterparts, and that is a particularly problematic position for many former Bloc supporters now considering to vote for the NDP.

It will be up to Layton to ward off these attacks. I think he might be able to do it, as unlike the other two anglophone leaders Layton speaks decent working-class French (he did grow up in Montreal, after all). The more educated French of Michael Ignatieff and the heavily accented (and at times difficult to understand) French of Stephen Harper will not likely resonate with francophones once they are pressed by Duceppe and knocked off message.

In any event, the French debate will be an interesting one. It's unfortunate we only get one in each language.

My apologies for the late update today, my alarm clock is to blame. 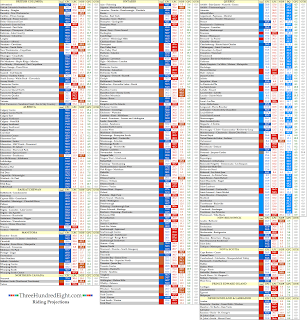