This fourth week of the campaign has been, without a doubt, the most interesting. We've seen polls flail wildly but what has been unmistakable is that the NDP is making some gains - some huge gains.

But after receiving many, many requests for NDP ceilings and in light of the NDP's gains, I think a third interesting question deserves an answer: can the NDP form the Official Opposition?

Before getting to the NDP, let's take a look at the Conservative ceiling. It does provide a glimpse of one potential consequence of the NDP's gains, and that is a Conservative majority.

Based on receiving 45% of the vote nationally (48% in British Columbia, 72% in Alberta, 62% in the Prairies, 46% in Ontario, 24% in Quebec, and 44% in Atlantic Canada) the Conservative ceiling is 170 seats, or a comfortable majority government.

This is a drop of eight seats since last week, but is generally where the Tories have been since the start of the campaign. The Conservatives win 24 seats in British Columbia, 28 in Alberta, 24 in the Prairies, 61 in Ontario, 15 in Quebec, and 17 in Atlantic Canada.

The Liberals, with 61 seats, still form the Official Opposition while the New Democrats, with 43 seats, take third-party spot. The Bloc is reduced to 33 seats, while one independent is elected.

The Liberal ceiling is based on 31% national support (34% in British Columbia, 22% in Alberta, 23% in the Prairies, 37% in Ontario, 24% in Quebec, and 41% in Atlantic Canada). With this level of support, the Liberals would win 91 seats, 10 fewer than their ceiling from last week and very far from a minority.

The Liberals win 11 seats in British Columbia, one in Alberta, four in the Prairies, 38 in Ontario, 18 in Quebec, and 18 in Atlantic Canada.

With 138 seats, the Conservatives still outpace the combined total of the Liberals and NDP (35). The Bloc, with 43 seats, retains third-party standing. 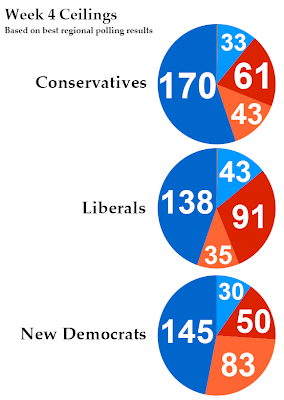 And now the New Democrats. It's been a stellar week, and though I haven't gone back to run the numbers I can say with confidence that we wouldn't have seen anything close to this week's ceiling for the NDP earlier in the campaign.

The Conservatives would still win 145 seats and have first crack at a minority government. The Liberals would be reduced to 50 seats while the Bloc Québécois would win only 30. Jack Layton becomes the Leader of the Official Opposition, and the first man the Governor-General turns to if the Conservatives are unable to get a Throne Speech or budget passed.

This scenario has the NDP winning the most seats in Quebec, but even if we prune that back a little to 20 seats and cut their Atlantic Canadian gains in half, we still have a scenario where the NDP forms the Official Opposition. So this possibility isn't based solely on a rogue poll. 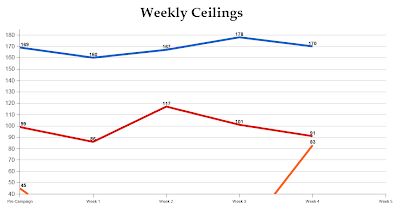 The chart above shows how the Conservatives have been holding steady, and how the Liberals' hopes have diminished as the campaign goes on. The New Democrats' best-case-scenario before the campaign was only 45 seats, and in Week 4 they stand ready to supplant the Liberals. It is really quite remarkable.

Week 5 will be determinant. Has the NDP peaked too soon? Will the sort of pull-back we have often seen when the Conservatives have approached majority territory happen to the NDP? It's possible many former Bloc and Liberal supporters will return to the fold once they see that their traditional parties are about to be humiliated.

Or, will voters now see the NDP as the alternative and flock to the orange banner? This campaign was supposed to be a snorer, but instead it looks like it could be the most surprising finish since 1993.
Posted by Éric at 3:07:00 PM